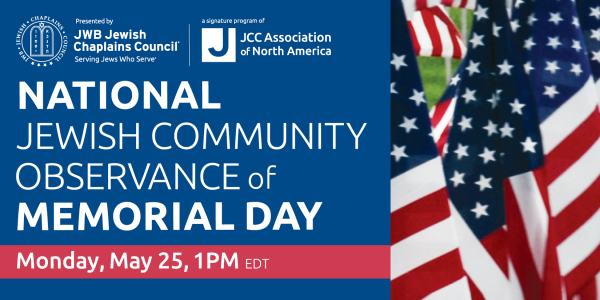 From the Revolutionary War through today’s ongoing fight against terrorism, American Jews have served nobly in all branches of our country’s military—and many can be counted among the casualties of war. As one of only a handful of U.S. government-accredited agencies that serves the religious needs of Jewish military personnel and their families, JWB Jewish Chaplains Council®, a signature program of JCC Association, believes it is incumbent upon America’s Jewish community to honor the day—and all the military heroes who made the ultimate sacrifice for this country—as one of both national and Jewish significance.

You’re invited to the first-ever National Jewish Community Observance of Memorial Day, which will include a commemoration that will premiere live on the JCC Association of North America Facebook page at 1 p.m. EDT/10 a.m. PDT on Monday, May 25. The commemoration will feature greetings to the Jewish community from senior ranking military officials, messages from bereaved families, prayers honoring the fallen heroes of all wars and conflicts involving American troops, and more.

As we face continued change and uncertainly in light of the Covid-19 pandemic, it is reassuring to know that some things haven’t changed—Jewish commitment to our country and to the men and women who serve in our armed forces remains steadfast. It is time, therefore, for all of us to come together as a community to honor the day and, most especially, our country’s fallen heroes.