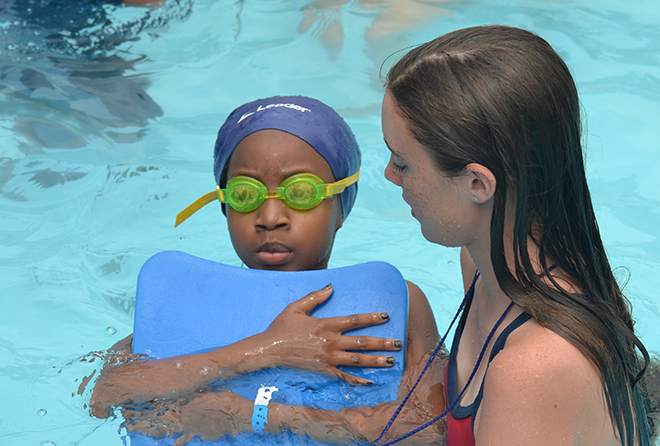 Sunrise Camps celebrate a decade of caring for kids with cancer

Carlyce Macintosh has got game.

And you’d never know, as she balanced on crutches intent on her volleyball game, that she’s also got cancer. Raring to go, this lithe 11-year-old wasn’t about to let a couple of crutches get in her way. After all, last summer, she attended camp in a wheelchair.

Carlyce attends Sunrise Camp in Pearl River, New York, one of four Sunrise Camps run for children with cancer and their siblings, age 3 1/2 to 16. The Pearl River location is run through the Rosenthal JCC in Pleasantville, New York.

Carlyce, who was diagnosed in 2013 with osteosarcoma, a bone cancer, had a portion of her pelvis removed. She went from being an active child to one in treatment, wheelchair bound.

“She had never been to camp before, and she really didn’t want to go,” says her father, Carlyle Macintosh, who urged his daughter to attend last year. “But she went from not really liking it, to pretty much loving it. This year she was looking forward to it.”

Carlyce is one of 206 children enrolled at the Pearl River location this summer, according to Sandy Haft, the camp’s director. But because of the realities of cancer — from ongoing treatment, to doctors’ appointment, or how a child feels in the morning — only 100 attend on any given day. But when they do, the staff strives to create a camp experience that feels like, well, camp, with rowdy singing to start the day, arts and crafts, sports and pool instruction.

“It looks like every other day camp in the world,” says Haft, who describes his work at Sunrise as “the most meaningful thing I’ve done,” bringing to bear 33 years of experience in the JCC field.

Haft is quick to point out that to keep things “normal” requires some unusual steps. Two of three nurses on site specialize in pediatric oncology. A scrape is never treated as “just as scrape,” and is seen to right away. Many staff are on a nursing track in college. Here, a rule about wearing hats is about more than sun protection. It masks that many of the children have no hair. And recruiting is done in the region’s hospitals, where the children and their families spend much of their time.

The idea for Sunrise began at a Paul McCartney concert for Paul Newman’s Hole in the Wall Gang Camp. Arnie Preminger, today president and CEO of Sunrise Association, attended. Camps for kids with life threatening illnesses were the beneficiaries and he was deeply moved by the children who took the stage to share their stories.

Preminger, who was then president and CEO of the Barry and Florence Friedberg JCC in Oceanside, New York, says the notion of camp struck a chord for someone with a JCC background. But the ones available were short-term camps, one to two weeks, and they were overnight.

“The more I thought about it, it just seemed like, well, my kids never went to sleep away, they didn’t want to,” he says. “Kids aren’t going to want to leave home when newly diagnosed. Day camp might have some particular value.”

There were logistics to consider, too. There would not be five kids on one block needing a bus. But there were 13 hospitals within driving distance from the Friedberg JCC, where pickups now occur. As he started talking to them, they also grew excited about the idea. 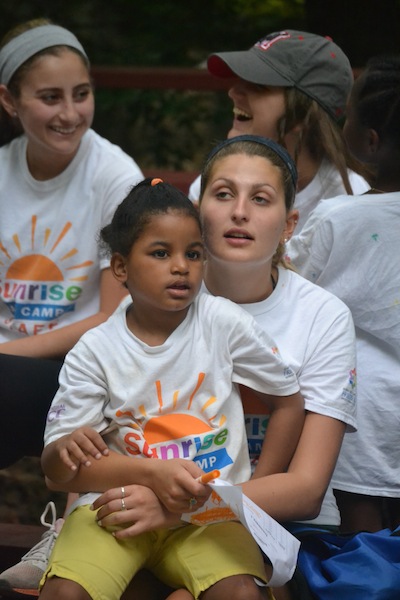 Today there are four Sunrise camps, two in the United States and two in Israel, with the Pearl River site the newest in the family. The four will serve 1,100 children this summer, a far cry from the 96 who attended the first year in 2006. The organization raised $5.5 million to support the camps, which are free to the children who attend.

One critical part of the camp is to include siblings. The “primary camper” is the one with cancer, but the siblings, who are often overlooked in family interactions because of the demands of cancer treatment, are by no means secondary at Sunrise.

“The reality is that the siblings are the forgotten children,” says Preminger. “They don’t get paid attention to . . . .By opening, the camps have forged stronger family ties. They can play together with no one telling them ‘no’ and it gives tremendous respite to the parents, who deal with this on an ongoing basis, 24/7. We have found [including the siblings] enormously successful.”

Nina J. Pickett, chair of the Sunrise Association’s board of directors, and the administrator for the Department of Pediatrics at Sloan Kettering Cancer Center, says that it was the very mission of being a day camp that drew her to the cause. And while Sloan Kettering works with overnight camps for children with illnesses, Sunrise takes into account that some children cannot go away, and allow families to be together at the end of each day.

“Illness takes so much away from these families that the time they have together is exquisite,” she says, noting again that the inclusion of siblings is so important. “The day camp experience itself is powerful in allowing so much of that.”

And for the staff who work with the children each day, it is no less inspiring.

“I knew that these kids would change my life, and that at the end of last summer, I had to come back,” say Maddy Steinhauer, 20, a second-year counselor.

“They are my little heroes.”