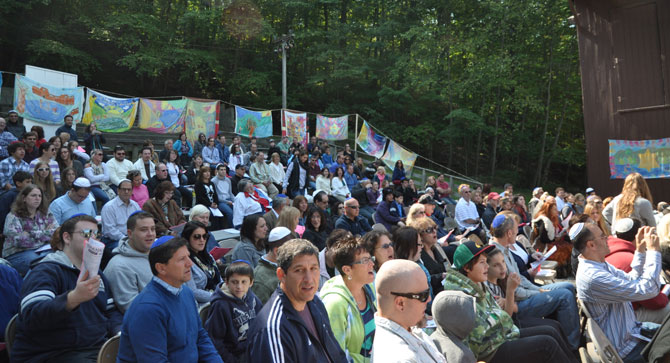 What happens when a camp celebrates Rosh Hashanah

Ina Muskin and her family aren’t religious. They don’t belong to a synagogue. And past high holidays haven’t seemed to be about themes of the season, but more about fees and membership.

Despite that, or maybe because of it, the family of four is going to travel 1,327 miles from their home in Southwest Ranches, Florida to Cold Spring, N.Y. to celebrate the Jewish New Year.

“A cousin of mine went to Rosh Hashanah services last year at Surprise Lake and said it was wonderful,” says Muskin, whose sons, Ethan, 13, and Harry, 11, have attended the camp for the past four summers. “The camp invited us to participate this year, because Ethan had his bar mitzvah there this summer. We said ‘Why not?’
“If it’s anything like the bar mitzvah, it’s going to be amazing.”

Ethan’s simcha, or celebration, was “laid back, warm and inviting,” according to his mother. With the whole camp participating and the beautiful camp scenery as a backdrop, it was everything the Muskin family was looking for in a Jewish experience. “It was the whole package,” she says.

Rosh Hashanah services shouldn’t disappoint, according to Surprise Lake Executive Director Jordan Dale. This will be camp’s ninth year offering the one-day Rosh Hashanah service to camp families and alumni. Approximately 350 people attend, mostly from New York, Connecticut and New Jersey, the states from which most campers hale. The service isn’t pitched just to campers, however, but keeps in mind the many staff who also attend, Dale says.

“It feels very much like a camp service, with a lot of reflections and opportunities for people who attend to think about the meaning of Rosh Hashanah,” he says.

Run by a team that includes camp Rabbi Claire Ginsburg, Neal Diamond Music Specialist Paul Suchow and year-round coordinator Wendy Dinn, the service lasts about an hour and a half. Families show up before for a light nosh and coffee, and the service is followed by tashlikh – the ritual of casting bread into water to represent the sins we discard during the days between Rosh Hashanah and Yom Kippur – at the camp lake. There are Rosh Hashanah-themed sessions after that, which include arts and crafts; an activity for younger children based on holiday themes; a reflective hike for adults; a kosher wine tasting; meditation and yoga. Following all of that is a luncheon, and the day wraps up by three o’clock.

The 112-year-old camp emphasizes Jewish identity and values throughout camp sessions. The holiday service follows suit, relying on music and explanations to carry the meaning of the day. There are no prayers in Hebrew without context, says Dale, and often they are given multiple contexts with different ways for participants to connect to the material.

“The service was designed for people who feel like they should be doing something for Rosh Hashanah but are not, or typically are attending a temple service but find it’s not working for them,” he says. “If that’s the case, they just aren’t being reached. Someone who attends temple but finds it painful – that’s not what it’s about.”

The idea behind the service was to not only give camp families an alternative, but also for the camp to engage with them outside of the summer sessions, he says. To that end, the camp offers a Labor Day family weekend, a Sukkot celebration and a second-night seder.

For Robbie Bloom, who grew up Orthodox, and her husband, Steven, who grew up Reform, the service provides real meaning and spiritual connection that is “more than just reciting the prayers,” says Robbie. Their two daughters, Andi, 12, and Dani, 10 have been attending Surprise Lake Camp for four and two summers, respectively. The family also attends a Labor Day weekend family retreat at the camp, and it was there they heard such positive buzz about the Rosh Hashanah service that they decided why not?

“You’re nestled in nature, there’s just not much better,” says Bloom, who attended Jewish camp in Montreal growing up and feels that it really helped forge her Jewish identity.

“They take the Torah out of the ark, over the lake with the mountains in the background,” she says. “It’s spectacular.”