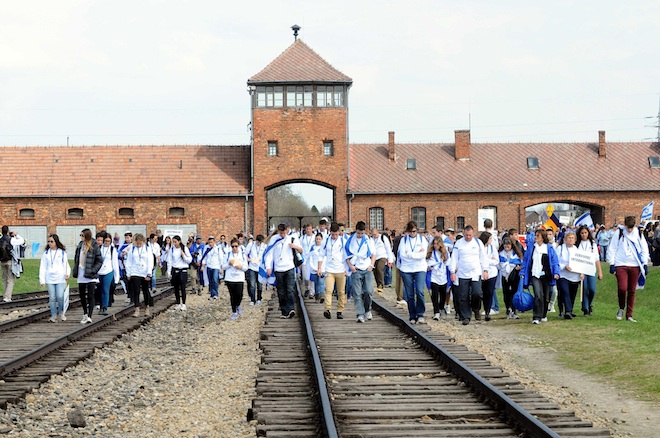 Those who cannot remember the past are condemned to repeat it.
— George Santayana

The only thing necessary for the triumph of evil is for good men to do nothing.
— Edmund Burke

Twenty-seven years ago, a few people including my father, Gene Greenzweig z”l, had a vision — that Jewish youth from around the world go to Poland to bear witness to our people’s destruction and the to Israel to celebrate our people’s rebirth. Today this vision is the March of the Living.

Each year, thousands of teens journey to Poland for Yom HaShoah, Holocaust Remembrance Day; and to Israel for Yom HaZikaron, or Memorial day; and Yom Ha’Atzmaut, Israel’s independence day. Retracing the “March of Death” from Auschwitz to Birkenau, teens march arm-in-arm carrying Israeli flags, declaring to the world that the Jewish people survive and thrive. They march in memory of the six million men, women and children who were murdered in the Holocaust.

Teens today are among the last generation to hear eye-witness accounts directly from survivors of the Holocaust. The survivors remember a world where the State of Israel did not exist. They experienced the dire consequences of such a world. My father, who was a teen in the United States during the Shoah said, ”If there had been a state of Israel, there would have been no Holocaust.”

The JCC, where all Jews come together in acceptance of our differences, is the right movement for the March of the Living.

JCC Maccabi Israel offers the March of the Living to the JCC community for the first time this year. Join a Jewishly diverse group of teens from JCCs across the country in a supportive environment that will include trained educators and a Holocaust survivor. Discover how the two seminal events in the 20th century, the Holocaust and the establishment of Israel, shaped Jewish and world history.

The Nazis did not ask what kind of Jew you were. Our enemies never do. Being a Jew marked you for extermination. When my father visited and stood in the gas chamber at Auschwitz I, he said, ”They stood here together and they died. Now we must learn to live together.”

The JCC, where all Jews come together in acceptance of our differences, is the right movement for the March of the Living, particularly in communities that do not participate. The March creates young leaders who have a common experience, able to confront the challenges of the Jewish future.

Journey to a deeper understanding of yourself and your Jewish identity. Join JCC Maccabi Israel for the experience of a lifetime on the March of the Living.

Renee Bomzer, was the inaugural director of Post March of the Living at the Central Agency for Jewish Education in Miami between 1995 and 2001. Renee and her husband, Gary, participated in the March of the Living with CAJE in 1992 and in the JCC Association FAM Trip to Poland and Israel in 2011 representing the Michael Ann Russell JCC. Renee’s father, Gene Greenzweig, was a founder of the International March of the Living.