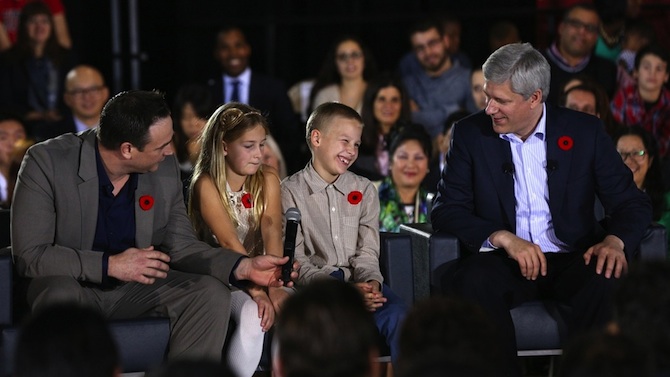 It’s not just any day when the head-of-state drops in on a JCC, but last week that’s exactly what happened when Canada’s Prime Minister Stephen Harper announced tax cuts that would benefit families. He made the announcement on a visit to Joseph and Wolf Lebovic Jewish Community Campus in Vaughan, Ontario. He and his wife, Lauren, also did a little hands-on arts and crafts at the Schwartz/Reisman Centre, as part of the visit, which is housed in the campus.

“We were honored that Prime Minister Harper chose the Joseph and Wolf Lebovic Jewish Community Campus as the destination to announce significant tax cuts for families as well as enhanced child care benefits,” says Andrew Levy, executive director of the JCC. “This announcement will have such a positive impact on JCC engagement as it will directly benefit families seeking recreational and childcare programs and services. The government of Canada could not have picked a more appropriate destination for this historic event.”