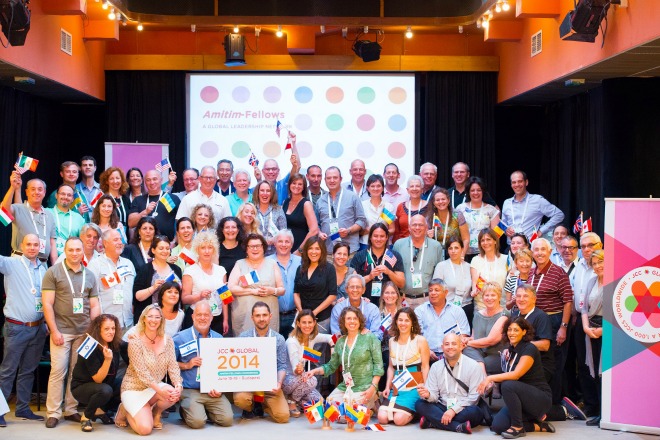 JCC Global will convene senior leadership of the Jewish Community Center Movement worldwide to address the main concerns of Jewish life today, focusing on Jewish peoplehood and enhancing programming at local JCCs in its ninth annual conference in Jerusalem.

The conference takes place Nov. 1-6 at the Yehuda Hotel, and includes more than 250 presidents and executive directors of JCCs from 30 countries. With more than 1,000 JCCs worldwide, it represents the largest global Jewish network.

During the conference, JCC Global will showcase its Amitim Fellows-A Global Leadership Network. The Fellows spent a week together in Budapest, Hungary in June 2014 and are now working on seven global projects that allow 25 JCCs from different communities around the world to work together for three years.

JCCs in North America that have Amitim Fellows include, Merage JCC of Orange County, Calif.; the Harry & Rose Samson Family JCC in Milwaukee, Wis; the Edith & Carl Marks JCH in Brooklyn, N.Y.; the Shorefront Y in Brooklyn, N.Y.; the Sid Jacobson JCC in East Hills, N.Y.; the JCC in Manhattan, in New York; the JCC of Greater Washington in Rockville, Md.; the Kaplen JCC in Tenafly, N.J.; and the JCCs of Greater Toronto, in Canada.

“By showcasing the Amitim-Fellows’ global projects and understanding the value they bring to the local Jewish community, another milestone to the continued viability and purpose of the world wide movement of JCC Global will be added,” according to JCC Global President Jane Gellman, a past president of the Milwaukee JCC, and member of JCC Association Board of Directors.

Approximately 30 representatives from North American JCCs and JCC Association will be attending the conference, many of whom are also attending the first JCC Innovation Lab: Jerusalem, which seeks to re-imagine the role of JCCs in the 21st century with some of Israel’s most dynamic and creative thinkers.

Speakers will include a Dr. Diana Pinto, a leading historian from Paris, who will focus on recent political and social trends in Europe and Maxine Fassberg, general manager of Intel Israel and vice president of TMG. Delegates will also participate in a survey about Jewish identity, personal security and Israel relations, with the results being released during the conference.

“As dynamic, pluralistic, cross-generational and cross-cultural institutions, JCCs are best positioned as builders of a positive Jewish identity,” says Smadar Bar-Akiva, JCC Global executive director. “[They are] the big tent that can bring together diverse Jews and non-Jews in a welcoming environment, locally and globally.”