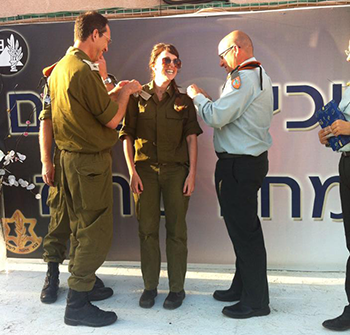 Last summer, I thought I was all set. I was going to be working as camp director at Camp Kimama, the first international Jewish summer camp in Israel. Educators and shlichim, or emissaries, like me, who had worked in Jewish camps in the United States, created it 10 years ago, looking for an Israel-based camp like this.

I was so excited, preparing for the campers, getting ready. And then the war with Gaza broke out, and I was called up to the army reserves. I remember talking to the camp’s CEO, to tell him. How could I give my all to the IDF, when I was thinking about my summer camp so much?

He gave me good advice: That camp understood its mission, that there was a benefit to bringing kids from all over to Israel. “We understand there are results, why we do this camp in Israel and not in the States,” he said. “And you understand you should do the best that you can in your role in the IDF.”

The answer was “yes.” As a former shlichah on a college campus and in several JCC camps, I understand that two-way relationship, what shlichim bring to their JCCs through the programs they create; and in turn, what they take back to Israel from the Jewish communities that they serve.

I have three main things I hope to do while working with JCCs. First, I want to help them build their young leadership and connect to an age group that is hard to reach. Most of the 24 shlichim working in JCCs today are in their 20s and 30s, and they have the ability to make connections with this often hard-to-reach generation.

Even so, they are very good at working with all sorts of ages! And I want to help them bring the Israeli point of view into the JCC. The third thing I hope they’ll do is bring that Israeli essence that is part of who they are – and part of Israel – to the J.

I’m a unique product of Israel. Both of my parents made aliyah. My mother came from the Ukraine in the 1970s and my father came from Rumania in 1951. So far, the only things I miss about Israel are my family, the atmosphere around the holidays and the food I love!

About 10 years ago, I had the privilege of being part of the Pioneer Ayalim Association, made up of students to settle the Negev and Galil. There were six of us and we went to see then Prime Minister Ariel Sharon in his office, two days after his first stroke. It was Hanukkah time, and all the miracles were in the air, and we were talking about what we would do, what these two regions would look like in a few years. And he said that when he was a young officer, he saw the eyes of his soldiers, how they looked at him, and how he knew that he was doing the right thing then and the right thing today by supporting ayalim, young adults who want to live and volunteer in some of Israel’s toughest places.

In the last month, I have spoken with our shlicim and I can hear the intensity in their voices. It brings me back to that conversation with Sharon, and I get that same feeling about going forward. They can contribute so much, and are so passionate about what they can bring to all the Jewish people all over the world.

It’s this that makes me so excited about this position, working with them and with our JCCs, and coordinating the Israel education at HangTime at the JCC Maccabi Games™ and ArtsFest™, where we connect Israel with participating Jewish teens.

I believe that this is the value of us as shlichim—we learn so much from the Jewish community here about Jewish life in America and that gives us something of enormous value to bring home at the end of shlichut, to help develop the Jewish state of Israel.

Michal Heskelovich is JCC Association’s continental shlichah. Contact her to learn more about having a shaliach at your JCC.