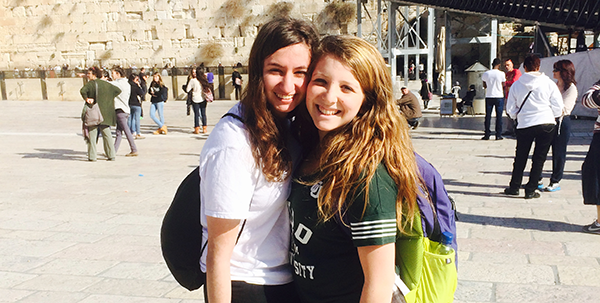 JCC camp staff age 18-26 are eligible for this trip, even if they’ve been on a peer trip to Israel before. Now they have a second chance to see Israel through a different lens.

The JCC Camp Staff Taglit Birthright Israel trip provides JCC camp staff with the opportunity to experience Israel on a trip that is uniquely designed for them. Participants will travel throughout the country with their camp friends and others representing JCC camps from across North America. They will be exposed to the diversity and excitement of Israel, from its ancient past to the “start-up nation” it is today.

The added value of this special Taglit Birthright trip is that each participant will return to his or her JCC camp the following summer with greater knowledge, love and understanding of Israel and will be able to bring this back in meaningful ways. Don’t take our word that it was an experience of a lifetime; get the scoop from someone who knows. Check out what Camp Wise counselor Hannah Tucker has to say about the experience.

I’ve been at Camp Wise for nine years, starting as a camper, and now in my third year as a counselor. Last year, when I learned during camp that JCC Association would be putting together a Birthright Israel trip just for JCC camp staff, I was so excited.

Some of my camp friends went with Camp Wise when were campers, but I didn’t get to go. Both of my sisters have been on Birthright trips and this was something I really wanted to do. I had never been to Israel before. This was something that I had always dreamed of doing.

From the minute we set foot in the airport, I knew this was going to be a great trip. Not only were there 16 Camp Wise staff there, but there were also counselors from three other overnight camps and two day camps. We had so much to talk about, right from the get-go. We all instantly clicked, and that really set everything in motion for the rest of the trip.

Although the whole trip was very exciting and I got to see do and see so much packed into those 10 days, there were two moments that really stood out. The first was when we all got to plan our Shabbat. Groups of three and four planned Friday night, Saturday services and havdalah, the ceremony when Shabbat ends, and we rejoin the workweek. We each took pieces of our respective camp traditions, assigned roles and led the different parts of the Shabbat services in our own camp’s style.

I learned that even though each camp does things differently, Shabbat brings us all together. And even when things are different, we all have enough in common to join in. It seemed like no sooner was one camp group beginning its own tune for a Shabbat song or cheer that others would join in. Everyone just seemed to know what to do right away. It was pretty clear — it doesn’t matter what JCC camp we worked at, we all seem to know how to have just as much fun!

Our visit to the Western Wall, or Kotel, was incredibly moving. At camp, I’ve done activities, first as a camper, and now with my own campers, where we write notes and pretend to put them in the Wall. But now, I was putting my own very real message into the ancient stones of the Kotel.

I turned left and right. My friends were crying. I was crying. It was so cool to see how deeply it touched everybody.

On Birthright trips, they usually have Israelis who are about the same age joining the group. The Israelis who joined us had all worked in overnight camps in the United States; there was someone who had worked at Camp Wise, and others who had worked at some of the other camps represented on the trip. It was really special we all had that in common and could relate to one another through our camp experiences.

JCC Association and Birthright Israel are offering this trip again this year, and it’s really a special opportunity. I stay in touch with the friends I made from the trip. It was such a positive experience, and I’m so glad that I got to go.

In years past, at camp, sometimes during an activity they might ask who had been to Israel, who can relate to this. I’d watch others raise their hands and contribute, but it was something I couldn’t participate in. Now, I can bring that and share and let everyone know why he or she would want to go to Israel. And when they ask about this JCC camps trip, I can bring that extra oomph to get them to go, because it is such an amazing experience.

Hannah Tucker, 19, from Cleveland, attends Ohio University. She has attended Camp Wise for nine years, the last three as a counselor.

Want to go or know someone who does? You can get more information and step-by-step instructions for pre-registration and registration here. For any questions please contact Faryn Bierman.