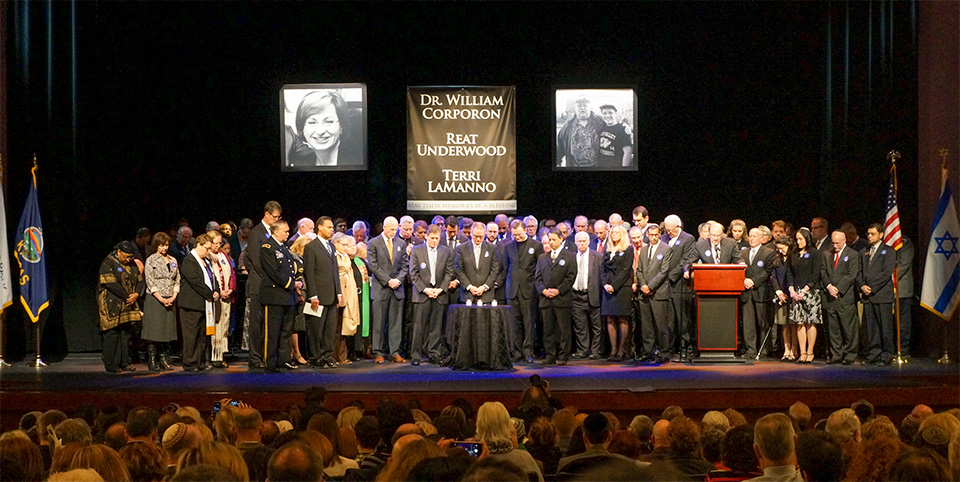 Moving beyond the Kansas City Shooting

The afternoon was shaping up to be a busy one for the Jewish Community Center of Greater Kansas City and its President and CEO Jacob Schreiber. Actors were backstage, preparing for a final performance of “To Kill a Mockingbird,” based on Harper Lee’s famous novel about race and coming of age in the South. And Kansas City Superstar, a kind of downhome version of “American Idol,”
was just getting underway and Schreiber was to be a judge.

“I was in the social hall, and all of a sudden the door opens and in come a lot of people. I thought it was a tornado warning, or something weather related,” recalls Schreiber of the day that F. Glenn Miller, spouting “Heil Hitler” shot and killed two people in the JCC’s parking lot, and a third at a nearby Jewish senior residence, all in the leafy Kansas City suburb of Overland Park.

Schreiber headed to the entrance to make sense of what was happening. He didn’t realize at the time that there was none to be made.

“I did not imagine that this type of thing would happen here,” he said.

Learning that two people had been shot on the grounds of the JCC, his main focus was to keep everyone safe. He sent actors into the JCC’s theater green room. Staff had been drilled about how to handle such an emergency. They kept people calm and knew what to do. Those, like the theater manager, who was a trained EMT, and the front desk person, who is an army medic, swung into action and went to help the victims. Without thought to their own safety, others assisted people from the parking lot—including Mindy Corporon, the mother of 14-year-old Reat Underwood, and daughter of William Corporon, the two victims.

Once the initial concerns about safety had passed, the community was left not so much with a sense of how to handle security, but rather what do you do to handle the emotions that roil in the aftermath? Was there a bigger picture?

At the JCC, where 45 percent of its 8,500 members are not Jewish, it came as a shock to perhaps only the shooter that the victims were churchgoers. The JCC, which is celebrating its centennial anniversary this year, has touched everyone’s life in the region, Schreiber says. “We’ve been around 100 years. And everyone in this area has been a member of the JCC, or has participated at the JCC, or has one degree of separation from the JCC,” says Schreiber.

“This was an attack on their community center.”

That was evident in the immediate wake of the shooting. The entire community—Jewish and not—came together for an interfaith service at the JCC. More than 1,300 people attended to remember Corporon’s son and father and Terri LaManno, who was killed soon after at nearby Shalom Village.
Since the shooting, the JCC revived its V’ahavta campaign, handing out more than 2,000 V’ahavta stickers following the service. Initially conceived as a customer service and staff-building program meant to take the JCC from the bottom of JCC Association Benchmarking in staff satisfaction, it grew to be an infectious awareness campaign about treating one another kindly, stemming from the Hebrew phrase, v’ahavta l’rei-acha kamocah, that you “should love your neighbor as yourself,” Schreiber says.

The V’ahavta program won a Zahav award for excellence in attracting and retaining staff at the JCC Biennial in San Diego. In the wake of the shooting, it took off again in the community. People wanted something to wear in solidarity with the JCC, and the stickers had become closely identified with it in the preceding year. Everyone associated with the JCC knows the word “v’ahavta,” Schreiber says, which means “and you shall love.”

To Allan Finkelstein, president and CEO of JCC Association, the challenge going forward is how to take a terrible message of hate and turn it around. “This happened in Kansas City, but it happened to all of us,” he says. “The response should be, ‘How can we prevent this?’”

JCCs are the largest early childhood education providers in the country. And they reach thousands more young children through teenagers in camps each year. They have an enormous platform through which the values of tolerance, justice and diversity can be taught, Finkelstein says. “The shooter grew up in another generation, in a world of hate. It’s for us to counter that by using this platform.”

JCC Association’s TAG: Daily Living Through a Jewish Lens, is a curricular initiative meant to address those very issues. The acronym stands for Torah (learning and living), Avodah (service and spirituality) and Gemilut Chasadim (acts of loving kindness), and is a nod to the three pillars upon which the world stands as described in Pirkei Avot (Ethics of the Fathers).

We are all created in God’s image, and if our families don’t understand what that means and live their lives that way, we can help them.

The program has been an effective way for JCC camps to emphasize their Jewish missions. They help staff understand Jewish concepts and relay them to children across a wide range of ages. And JCCs have been eager to participate. In 2014, 111 camp professionals participated in TAG training, representing 56 camps and 57 JCCs.

There are greater challenges in working such difficult concepts into early childhood curriculums. And yet there are still ways to incorporate such openness and learning, according to Mark Horowitz, vice president of early childhood education and family engagement.

“We already do a lot of things in our schools about how we look different, how we are different and how to celebrate those differences,” says Horowitz, who notes that 50 percent of JCC educators are not Jewish, and diversity is clearly on the radar.

Sheva, JCC Association’s signature early childhood program, involves seven core elements rooted in early childhood development. A key piece is how families are engaged, said Horowitz. Modeling behavior for the entire family is part of the idea behind such learning.

“In the Jewish tradition it says that if you want your children to study Torah, you have to study it yourself in their presence,” says Horowitz. “We are all created in God’s image, and if our families don’t understand what that means and live their lives that way, we can help them. We have a chance to create a whole new world of children.”

In the days following the shooting in Kansas City, the fact that it was three non-Jews who died was underscored across the media. Rabbi David Lyon of Congregation Beth Israel in Houston was troubled by language that considered this ironic. It was, in his eyes, the opposite. He wrote a piece for the Houston Chronicle, celebrating the Kansas City JCC’s pluralistic nature and that the shooter had missed that point. He “was mistaken when he identified the Jewish Community Center as some sort of Jew-store where he could find his targets, starting in the parking lot,” Lyon wrote.

He agrees that JCCs, with their Jewish mission and welcoming spirit can play a large role in creating a culture of respect. “JCCs are places where all people can enter without having to express a commitment to the faith, the dogma or whatever that is,” he says. “The JCC, maybe they have Jewish films, Jewish education, Jewish programs, but it is for everyone to come in and learn, to expand our understanding.”

That sign outside, with the word “Jewish” prominently displayed, tells everyone it is a place with a mission, but it’s one that is “serving a universal need in the community,” he says.
Following the shooting, the outpouring for the JCC of Greater Kansas City was tremendous, according to Schreiber. Cards poured in from all over the country: a Jewish school in Roslyn, New York alone made 300; an elementary school in Olathe, Kansas, sent them; one church sent an enormous card signed by all its members. An Islamic school sent a letter. Others arrived from India, Turkey and Israel.

If there was a lesson to learn, Schreiber says, it was exactly the opposite of what you would expect.

“When you take a look at it, you think ‘Lurking around the corner, there is an anti-Semite, waiting to kill us,’” Schreiber says, doing a quick, arm-chair analysis. “But actually, [what we learned is] that in every corner there are hundreds of people waiting to show love. You don’t see that until something like this happens.

As the JCC moves forward, it is focusing on its 100th year, including a 100-hour fitness challenge, honoring donors who have been regular givers over the past 10 years, and hosting a recent reunion for 50 people who had been members of the JCC’s two previous locations.

Working with Mindy Corporon, the mother and daughter of the two victims shot in the JCC parking lot, the JCC is donating $100,000 of the $1 million raised by Superstar to the Reat Griffin Underwood Rising Start fund, in memory of her son to help support KC Superstar, the program he was there to participate in that fateful day, and JCC education programs. The fund will assist young people who wish to train in the performing arts, “because that was Reat’s love,” says Schreiber.

At the community event held in the aftermath of the shooting, Corporon insisted that “we make something good out of this,” Schreiber says. “We have to follow her lead.”