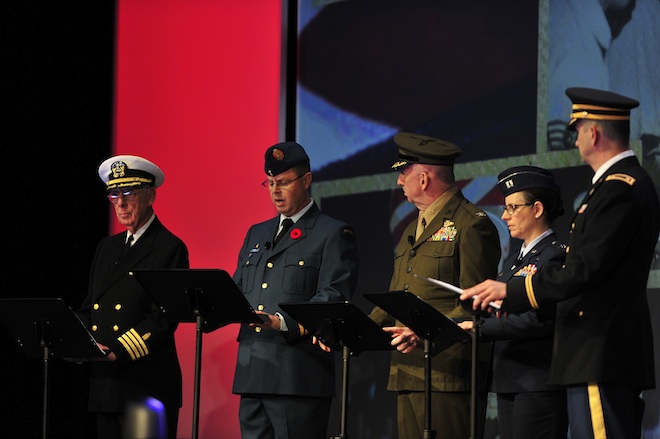 When Jewish Federation’s of North America wound up the final plenary of this year’s General Assembly on Veterans Day, they did so by recognizing the work of JWB Jewish Chaplains Council and the men and women who carry out its mission.

Four JWB chaplains, each representing a branch of the United States armed forces, and one Canadian chaplain, told stories of their service – some humorous, most moving – and the impact they have on the Jewish men and women who choose serve to protect our freedoms. The event, which took place at the Gaylord National Resort and Convention Center in National Harbor, Md., included Capt. Irving A. Elson, U.S. Navy; Capt. Sarah Schechter, U.S. Air force; retired Capt. Matt Simon, U.S. Navy; and Maj. Henry Soussan, U.S. Army.

The program recounted how Jews were present in the military dating back to the Revolutionary War that put America on its path to independence. It recognized that they have continued to serve with valor ever since, many making the ultimate sacrifice.

We’ve included the video of this moving tribute, which runs nearly 24 minutes long. Moving in detail and rich in history, it is a stirring homage to those Jews who serve our country, and to the chaplains who stand with them.