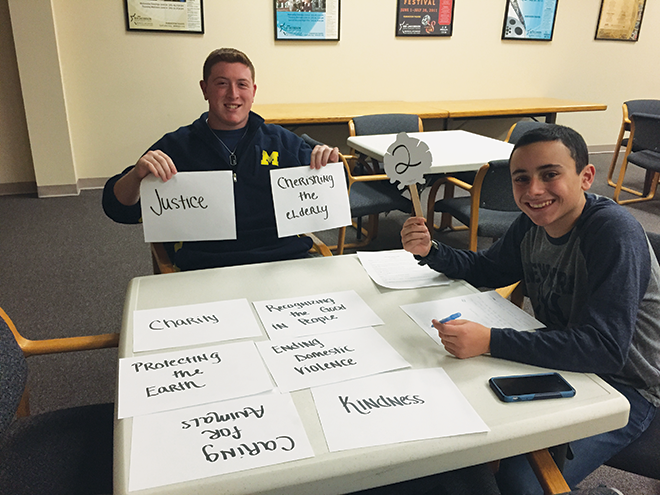 Getting teenagers to do anything can be a challenge.

Their days are already jam-packed with school, sports and other extracurricular activities, not to mention active social lives. Despite all that, teens across the country are willingly adding to their busy schedules and participating in Jewish philanthropy projects in
their communities.

Jewish teen philanthropy taps into teens’ desire to do good and has been on the rise since the late 1990s. But as more Jewish organizations realize that their future donors may currently be in high school, there has been increased interest in teaching them the ABCs of giving. And thanks to organizations like the Jewish Teen Funders Network (JTFN), teen-led giving has become part of the culture at many JCCs and camps over the past few years.

JCCs and JCC camps are places where teens can connect with people from different synagogues and high schools and learn from each other. Although “philanthropy through a Jewish lens” may not be part of a traditional curriculum, it’s something that teens are eager to learn. A study by the United Nations Foundation and the Women’s Philanthropy Institute at Indiana University Lilly Family School of Philanthropy, found that nearly nine out of 10 American youth between the ages 8 and 19 give money to organizations dedicated to charitable causes. If they work together, the value to the community, and the impact on the teens themselves, is bound to increase exponentially.

Sid Jacobson JCC (SJJCC) in East Hills, New York was part of JTFN’s Stepping Up Long Island pilot program, and formed its Teen Foundation three years ago. They allow a maximum of 10 teens to sit on the board of the Foundation each year, and give them power and responsibilities similar to an adult board member. The teens “buy in” with an initial donation, and have $1,000 dollars to give to organizations of their choice. Local non-profits can submit applications for funding consideration, and once the teens narrow down their choices, they visit each site and meet with leaders of the organizations.

The biggest impact is just the awareness of how this type of process works and that they can absolutely make a difference.

There are formal and informal educational opportunities as well. The teens learn about the difference between fundraising and philanthropy, what giving looks like in a Jewish home, and where funding comes from for a charitable organization. The decision-making process teaches them about responsibility and leadership. Learning about the non-profits themselves opens their eyes to areas of need in their communities.

Becca Firestone, director of teen services at SJJCC, is always impressed with the commitment the teens make to this work.

“Scheduling is always a challenge. Because it’s such a small group, it helps to have teens that are really committed,” she says. “Once they get into it and understand the purpose of why they’re there, and have ownership over it, they want to be there. If they aren’t there, their voice isn’t heard.”

At SJJCC, a number of teens have come back to the program for a second year and have taken more leadership initiative. Whether they participate
for one or two years, the experience is always a meaningful one.

“It was so rewarding for me to serve on the SJJCC Jewish Teen Foundation Board and distribute funds to help people in our community that are in need,” says Raimy Klestadt, 17, a member of SJJCC’s Teen Foundation. “It was a different way of giving back and I really learned a lot about the different issues facing my community.”

JCC Camps are also empowering teens to make a difference in their communities. Camp Chi started its teen foundation in 2012, in partnership with JTFN. The program consists of 20 hours over a four-week camp session, and takes the teens through an eight-step process designed by JTFN. The campers review proposals, go on site visits, work through the process of writing a mission statement and understanding group consensus, and ultimately award money to organizations.

Camp Chi Assistant Director Brad Finkel enjoys seeing how much his teens transform in such a short period of time. “The full cycle is truly a magical process and one that we have seen our teens grow from. Probably the biggest impact is just the awareness of how this type of process works and that they can absolutely make a difference.”

The B’nai B’rith Camp (in Otis, Oregon) Teen Foundation Board is made up of 14 members of the 10th grade Leaders-in-Training (LIT) program. Like the other foundations, the teens work together to write a mission statement to guide their decision-making process. The first version emphasized the relationship between philanthropy and Judaism:

The mission of the B’nai B’rith Camp Teen Foundation is to support the Lincoln City community through local nonprofit organizations, which will reflect the Jewish values of charity (tzedakah), community (kehillah), and compassion (rachamim).

The teens went a step further by coming up with what they called their “guiding goal.” It stated, “The program will empower the residents of the community to better help themselves carry and support a successful lifestyle, and also strive to bring success and sustainability to the nonprofit organizations.”

“It was a fascinating and fair process, without any influence from the camp counselors and staff,” said Executive Director Michelle Koplan. “The teen board made their decision solely utilizing the mission statement they created to guide them, along with learning about tzedakah and philanthropy through a Jewish lens.”