Community, tradition, and transcendence: JCCs don’t look much like Dead shows – though anyone who needed a miracle could count on finding a cluster of JCC leaders and a gaggle of members at the Santa Clara and Chicago shows. But as any Deadhead can tell you – as they lived as both Deadheads and teachers, lawyers, brokers, activists, writers and artists, homemakers, dropouts, or JCCers – looks can be deceiving. In its way, the Dead carried values that any JCC would do well to cultivate in service to its members and neighborhoods and towns. 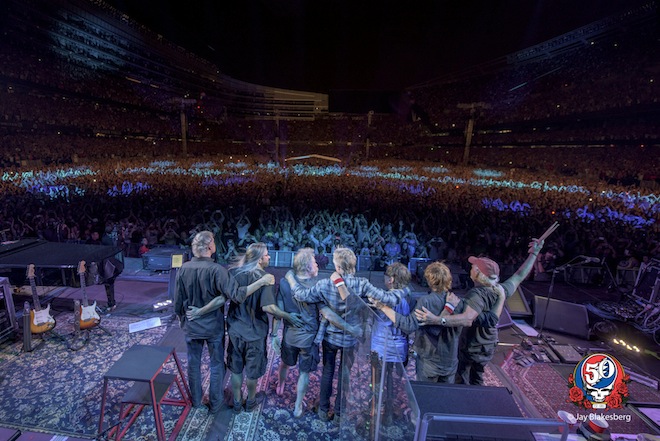 When Sounding Board first asked colleagues for the songs that point to where JCCs and Jewish communal life as a whole are headed, one of our friends suggested the Grateful Dead’s “Truckin’”:

The Dead took shape in the gap between beatnik and hippie culture in the Bay Area. The band made its name in mind-bending, psychedelic shows in San Francisco while trucking through death, drugs, and a musical melding of country, rock, folk, Latin, jazz, and that avant-garde institution known as Drums/Space. And they came to inspire not only several generations of road-warrior followers known as Deadheads, a league of jam band descendants, and a vast range of technological advances that power the contemporary live music experience, but also came to represent the voice of 1960’s counterculture long after its moment of perceived influence had passed.

With the Dead having just retired as a band this July Fourth weekend after 50 years of strange trips, it is a fine moment to think about what this sui generis American band of tricksters and survivors has to say about what JCC work is all about.

The first lesson of the Grateful Dead is the power of community. As much as any cultural experiment of its era, the Dead defined itself at every level as a communal ecosystem. Community, as the New York Times’ critic Jon Pareles noted in his review of their final show, describes the Dead’s musical styles and repertoire. And as The Atlantic explained a few years earlier, the Dead – long before Facebook or Google or Whole Foods or any of the other titans of socially-networked, values-driven businesses that dominate our consciousness today – based their business model on its understanding of community.

And then there is the community that served as the Dead’s constant companion: the Deadheads. It is impossible to think of the Dead without thinking of Deadheads, the multigenerational flock of followers who swelled to greet and follow the band on every tour, communicating in recordings, art, a softly coded language of lyrics and legends, every form of trade and barter, and called itself a family without distinctions of anyone’s individual strange trips.

A second lesson of the Dead is its ever-evolving reliance on old ways to be re-enchanted at every station of its journey. The Dead are said never to have played a song the same way twice. Midrashists of the rock, folk, and country canon rivaled only by Bob Dylan, whom they greatly admired (and as Dylan has stated often, including during a joint tour in the 1980s, the feeling was mutual), the Dead thrived on bringing light to obscure songs, ideas, and stories. Also, like minstrels of old, they covered the same circuit every year, the same venues, the same tribal gatherings, emerging just like the seasons. They were traditionalists to their core, and in the world of pop culture for 50 years this is quite a statement.

A third element is transcendence, a quest for experience beyond the mundane. Granted, this meant use and abuse of substances that led to the downfall of both members of the band and scores of followers. It also meant days of dancing, practices of meditation and healing, a merging of samplings of cultures from both East and West, crafts, potions, foods, and sounds and – as its name implied since its incarnation – a sense of both gratitude and mortality that grounded both the band and its followers in earthy elemental life, even as Dead culture opened channels for people to soar.

Community, tradition, and transcendence: JCCs don’t look much like Dead shows – though anyone who needed a miracle could count on finding a cluster of JCC leaders and a gaggle of members at the Santa Clara and Chicago shows. But as any Deadhead can tell you – as they lived as both Deadheads and teachers, lawyers, brokers, activists, writers and artists, homemakers, dropouts, or JCCers – looks can be deceiving. In its way, the Dead carried values that any JCC would do well to cultivate in service to its members and neighborhoods and towns.

At the conclusion of the final of three sold-out concerts in Chicago, where the Dead’s founding leader Jerry Garcia had played his last show with the band before succumbing to his own long strange trip in 1995, drummer Mickey Hart said, “The feeling we have here, remember it, take it home and do some good with it.” Hart was a student of the great mythologist Joseph Campbell, and like Garcia and his songwriting partner Robert Hunter, had a deep sense of the Dead as an expression of forces greater than itself. Such aspirations describe any grand communal experiment – and one well worth emulating at JCCs.

The Dead are dead; long live the Dead!