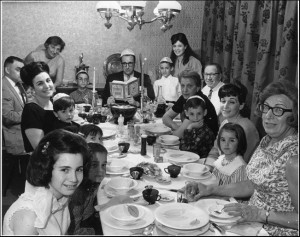 If you aren’t already up to your elbows in cleaning for Pesach, they you’re probably going to a Pesach-resort this year for the celebration of freedom. Either way, we hope you’ll be joining a seder, the communal meal and story that marks the first nights of the festival, when Passover begins at sundown on Monday, April 14.

Invited to attend a seder? Don’t know what you bring? You can’t go wrong with a good bottle of wine, after all, we are obligated to drink four glasses during the course of the seder. If you need suggestions, Taglit-Birthright Israel has a wine guide at the ready. And if you need some kitschy hostess gifts, or handouts for finding the afikomen, that hidden bit of matzah without which we cannot complete the seder, here’s some ideas from kveller.com.

Although some of us celebrate the holiday for eight days, and others, seven, and some keep many restrictions about food, and others, none, at some point, most of us will probably indulge in matzah and maybe a traditional food or two. Once you get tired of the traditional Ashkenazi fare with which most of us in the United States are familiar, you can move on to trying some recipes with quinoa, which the Orthodox Union has decided, once and for all, that the New World seed is kosher l’pesach.

And most of us have a favorite recipe for charoset, usually a mix of fruits and nuts that represent the mortar in the bricks the Children of Israel made when they were slaves. Ashkenazi Jews from Eastern Europe tend to use apples, walnuts and sweet wine. But Yemenite, Iranian and even Venetian Jews have other ideas.

There’s a cottage industry of cute Jewish holiday videos. Students and graduates from Midreshet Ein Prat, a beit midrash that brings young adults from across the religious and political spectrum together for study, has released their own, interactive version of the Exodus story. Guided by a giddy silliness, you can choose how Moses and the Israelites choose to flee, which plagues to send, and even what sort of dance they when they celebrate freedom.

However you choose to dine and celebrate, wishing you all a chag sameach!