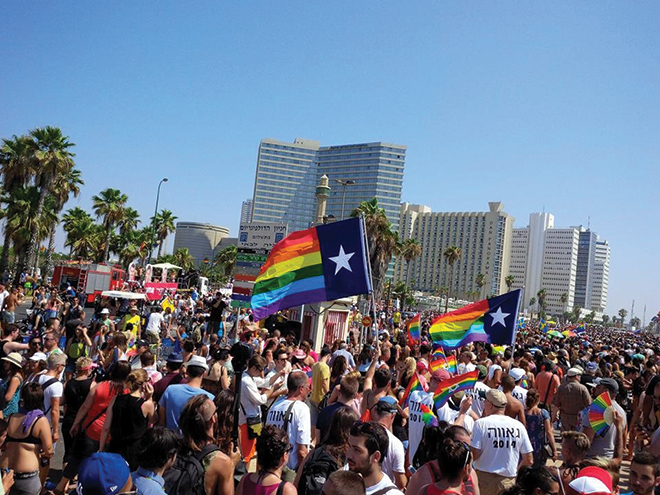 When Deb Seaman participated in JCC Association’s first LGBTQ Israel Pride trip in 2014, she figured she would come back with some great memories and a handful of mementos.

She didn’t think she’d come back with the best souvenir of all — a new relationship.

But Seaman, a native New Yorker, has relocated to Austin, Texas, to be with Tobi Taub, another participant in the trip.

“They say you relocate for love or for money,” says Seaman. “I moved for love.”

That benefit was a plus to participating in a trip that allowed her to combine her lesbian identity with her Jewish one in a powerful way. “The fact that we came home as each other’s souvenir, that was a bonus,” says Seaman. “The trip in and of itself was wonderful.”

And others will be able to have that opportunity in 2016, when JCC Association takes its second Pride trip to the Jewish homeland. The trip will take place from May 28 through June 9, 2016 and will again include participating in Tel Aviv’s celebrated Gay Pride parade.

“I had been to Israel before,” explains Seaman. “But the centerpiece to me was Tel Aviv Gay Pride. I have been going to Gay Pride in New York for 30 years now, so to go elsewhere, and have this be intertwined with my Jewish identity, my lesbian identity, that was the pinnacle of the trip for me.”

The 2016 trip, which takes place mostly in June — known as International Pride Month — hopes to build on the success of the last one, which attracted 20 participants, according to Aliza Orent, director of Jewish life and learning at the Jewish Community Association of Austin, who helped spearhead the trip with the support of the JCC Israel Center. She will again be coordinating and recruiting on the North American side for the 2016 trip.

“This is a long-term commitment from JCC Association in investing in the LGBT community and exposing them to a side of Israel that they may not have had the chance to experience in the past,” says Orent. “They come from all over and I’ve watched them build the kinds of relationships that others do who attend community trips.”

Although the 2016 trip will have some similarities, the itinerary will vary somewhat because some of participants from 2014 have expressed an interest in returning, Orent says. This one will include “From Bauhaus to Bialik—An introduction to Tel Aviv,” which is a walking tour of Tel Aviv’s Bauhaus architecture with some learning about H.N. Bialik, one of Israel’s poet laureates. There’s an opportunity to explore Tel Aviv by bicycle; and Shabbat dinner with lone soldiers — those Israelis who serve in the Israel Defense Force without nearby family support. As well, they will take in many traditional sites, such as the Kotel, Dead Sea and Masada.

“This is a really high-quality experience, and you’ll have fun, because that’s part of our agenda,” says Sless, who notes that the online registration will open in July. “We want people to tell their friends and spread the word among friends and family about this trip. There’s really nothing quite like word of mouth.”

Seaman, who met her bashert, or soulmate, on the trip, has no problem providing that positive boost.

In addition to being very well planned, the trip provided an opportunity to make new friends from across North America, she says.

“In addition to my favorite souvenir, we still keep in touch with others from Austin, all over the country, and from Canada,” she says. “It was really a very tight trip.”

*A very layered Yiddish word that means “fate” or “destiny” but also, “intended” or “meant to be.”