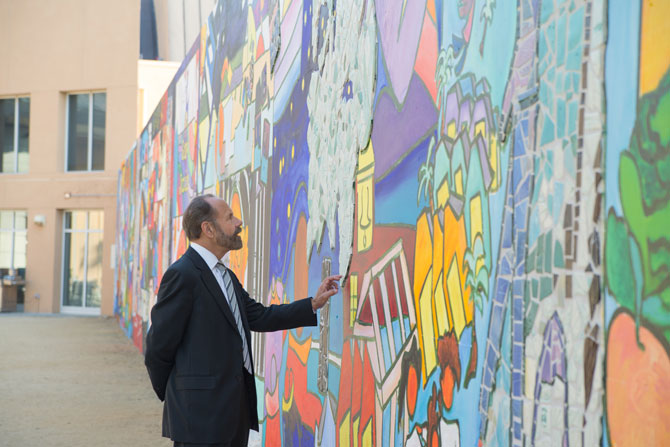 Senator Jerry Hill, D-San Mateo (who is quoted in the article) contemplating the significance of the Grow Justice Mural. Photo credit: Sharon Giordano.

The Grow Justice mural was a community endeavor inspired when Kimberly Gordon, Peninsula JCC cultural arts director, was introduced to artist Jay Wolf Schlossberg-Cohen. Upon learning of the renowned muralist’s background in community-driven projects for day schools, Jewish sacred spaces, and inner-city organizations, Gordon and the PJCC executive staff knew that a social justice mural would serve as an ideal companion piece to the Justice Garden. Furthermore, making it a community endeavor would help center the courtyard as a focal point for members and guests.

“For two weeks almost 400 people helped paint the mural under Jay’s direction,” Gordon says of participants who ranged from tiny toddlers to silver-haired nonagenarians. “This was a special once-in-a-generation project,” she adds.

When California State Senator Jerry Hill toured the mural, he was clearly moved. “This is something that everyone should see. It really grasps you,” the senator said. “The more people that see and understand the meaning of justice, the more engaged they will be in taking action.” 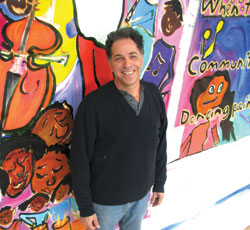 The project launched in summer 2013 when the Baltimore-based Wolf Schlossberg-Cohen held workshops at the PJCC with 345 community members, including staff, campers, students, and adults. Artistic abilities notwithstanding, everyone was asked to convey, by words or illustrations, their personal thoughts, anecdotes, and vignettes centered on themes of justice. Their contributions served as a blueprint for the artist who designed the mural while his artistic partner, E. Blaise DePaolo, created complementary ceramic pieces.

“I worked with a dramatically diverse group of people from around the world who weren’t afraid to talk about qualities of Jewishness,” Wolf Schlossberg-Cohen says of the PJCC’s multicultural community. “The mural was definitely going to have a Jewish theme and subtext, but with universal appeal. There were people from so many different places and it was important we honor them al l–– age, gender, nationality, race.”

He stressed the importance of people recognizing themselves personally on the mural. “It captures us at our best while addressing Jewishness in a way that is accessible to many people. My work reflects life as a possibility, a hope. That’s what being Jewish is all about, making this world a better place.”