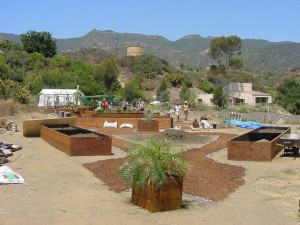 In the summer of 2001, a group of nine Israeli teenage scouts and eight American teens at Camp JCA Shalom designed and created a garden in the shape of Israel. Their vision was to teach about Israel through Malibu’s similar climate. They wanted to expose youth to the flora and fauna of the historical and awe-inspiring land of Israel through an interactive, hands-on garden. It was, unfortunately, the tragic death of Marla Bennett, beloved program director for Camp JCA Shalom, in 2002 that transformed the space. Marla was one of the victims of the Hebrew ?University bombing in Jerusalem. Having grown up at Camp JCA, she was an incredible inspiration to everyone who knew her, and she touched the lives of thousands of campers and staff members. She was also a huge supporter of the garden and of all Jewish experiential education. Her death sparked institutional change and the motivation to develop a garden that would speak to her passion and love for the land of Israel. ?The Marla Bennett Israel Discovery Garden was dedicated in her honor on June 6, 2004.

What is present today has far surpassed what anyone could have imagined in 2004. It is a garden that teaches about the Seven Species — the seven types of fruits and grain named in the Torah as special to the Holy Land — the history and geography of the land of Israel, the history of agriculture as told through Jewish texts, the seasonality of the crops in relation to the Jewish (lunar) calendar, Jewish holidays and more. It is a fascinating educational garden that has touched the lives of thousands and will reach many thousands more, allowing Marla’s legacy to live on.

The Marla Bennett Israel Discovery Garden is now only one piece of the Shemesh Organic Farm. There is an entire one-acre plateau, Gan Aya (the beautiful land), dedicated to growing and teaching about organic produce while highlighting Jewish values such as bal tashchit (do not waste) and beingShomrei Adamah ( guardians of the earth). It is in Gan Aya that lessons about Jewish agricultural laws, planting seeds, composting, cooking for oneself, being thankful and saying blessings are taught. Gan Aya is a space that inspires people to start their own gardens, to stop buying conventionally grown produce and to meet their local farmers. It is constantly under cultivation and has produced an thousands of  pounds of produce.

The third piece of the farm is lovingly referred to as Pinat Chai (the corner of life). Pinat Chai is a two-acre plot on a hill just above Gan Aya where twenty five horses, four ponies, two alpacas, two miniature donkeys, several goats and sheep, a couple of tortoises and a dozen chickens call home. Judaism places a great emphasis on taking care of animals, and it is through this addition that Pinat Chai educates visitors on kashrut, animal husbandry, tza’ar ba’alei chayim (the commandment to show kindness to domestic animals), and the connection between animals and the Torah. By following rules such as this, Pinat Chai is upholding thousand-year-old values and honoring the Judaism of our ancestors.