JCCs thrive on the dedication of their volunteers. Without their countless hours, there are programs and projects that simply would never happen. National Volunteer Appreciation Week runs April 12-18, this year, and JCCs can spotlight the people who give their all to the J.

Points of Light, which claims to be the world’s largest organization dedicated to volunteer service, says the week is about “inspiring, recognizing and encouraging people to seek out imaginative ways to engage their communities.” In the spirit of the week, we’re showcasing a few JCC volunteers who have thrown themselves into going above and beyond at their J, and doing so with dedication, imagination and a whole lot of love. 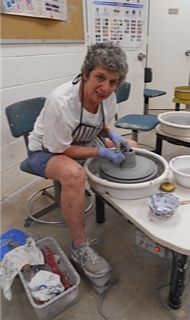 Seven years ago, Marge Mayer approached the JCC with the idea of developing a life-long learning program at the Evelyn Rubinstein JCC. Volunteers would plan the entire program and recruit volunteer teachers for specific topics. The program, known as Symposium, runs twice annually, hosting four classes designed by the committee and offered to the community for a reasonable fee.

Not content to rest on the success of the program, Mayer came forward with another idea: With a small investment in renovating the ceramics studio, the program could take off. She brought in a professional ceramics teacher, who helped design the space and come up with some teacher recruitment strategies. Marge and fellow ceramics buffs cleaned the cabinets of 40 years worth of molds and glazes.

“Once we learned that if we invested in the facilities, we could build a more professional program, it expanded into two other studios,” says Gayle Rockoff, senior associate executive director of ERJCC. “Now the art program is really expanding. Both of these happened because of Marge’s vision and passion.”

For Mayer, the JCC is family. Her husband, Hans, served as executive director and grew up at the St Louis JCC, and their children were actively involved at the Houston J growing up.

“When I pass through the door at the ERJCC, I feel like I am in the heart of our Jewish community,” she says. “Now that I am a senior, it’s my turn to give back to this organization that has made an impact on our family and the Houston community.” 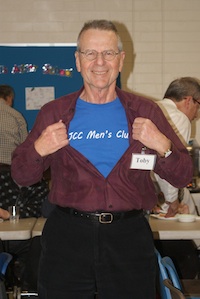 Although Toby Gottesman had been a member of the JCC of Greater Washington for 34 years, a life threatening illness helped him realize what a lifeline the place truly is. As he began working out at the JCC’s health and fitness center a few times a week, he realized that older men came to the J as much for the schmooze as they did for the workout.

This inspired him to start a men’s discussion group, now known as the Men’s Club in 2012. Meeting once a week on Tuesdays, it attracted enough participants that a second weekly session was added on Wednesdays. More than 70 men receive the weekly emails and the group has expanded to offer a biweekly chess club, and memoir writing, a dining out, poetry writing and investment groups.

And, of course, some of the participants work out together in the JCC fitness center.

“The men’s group is about feeling connected, and that’s what the JCCGW is about,” says Gottesman, who put in 180 hours to initially launch the group. In 2013, he received the Governor’s Volunteer Service Certificate from the State of Maryland in recognition.

“Toby has created a wonderful outlet for these men, many of whom are retired or widowed and adapting to a new stage in life,” says Debbie Sokobin, JCCGW’s adult services director. “Toby has given these men a gift with his time and dedication.” 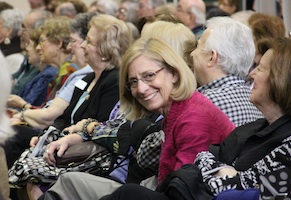 When it comes to doing good, Gail Gurin does a lot. A regular at JCC of Northern Virginia exercise and cultural programs, where she offers her time, she also gives mightily when it comes to helping others. Having chaired the JCC’s Mitzvah program for the past three years, Gurin sees it as a way to encourage others to work in social action projects. She coordinated volunteer activities at Food for Others; organized the highly successful Shoebox Recycling program, in which the JCC has collected more than 1,200 pounds of shoes; baked and delivered casseroles for the Lamb Center, a non-profit in Fairfax, Va. dedicated to the poor; and organized the annual Eat for Heat Pancake Breakfast to support the J’s anti-hypothermia project.

For Gurin, it’s just a way of saying thank you. “When I joined the JCCNV, I was unemployed and felt isolated,” she says. “I needed a place to go where I was welcomed and would be around happy individuals. The JCCNV provide an uplifting environment to interact with people of all ages and interests.”

There is no job too small or large that Gurin won’t take on. Her first volunteer activity was frying latkes for the annual Hanukkah party. She continues to assist the cultural arts department during the annual book festival and the performing arts series; and for adult services, she sorts books for the used book sale.

“Through her volunteer work, Gail has helped the JCCNV impact the lives of so many people in our community and abroad,” says Carla Rosenfeld, JCCNV adult programming director.

For 14 years, Claire Scholz has been volunteering at the JCC MetroWest, coming in four days a week to work the senior lunch program. She registers people, maintains the daily attendance logs, greets participants as they come to lunch, orients new attendees, provides information on upcoming events, tracks daily donations — you name it.

She has served twice as president of the Margulies Senior Center, chairing its meetings and advocating on behalf of he more than 200 members of the center. She currently sits on its executive board as vice president.

Scholz enjoys volunteering because she likes being with people and “being of service to those who need it.

“If I didn’t get so much satisfaction from volunteering here, I wouldn’t do it. It gives me a regular sense of purpose.” 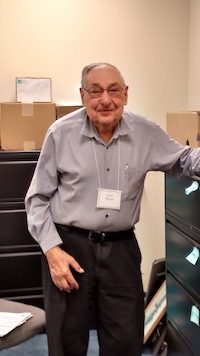 “Everyone knows Larry Becker,” says Hillary Wenk, administrative assistant, adult programs, at the Jewish Community Center of Chicago. “He is the face of the JCC.”

Becker has been a fixture at the JCC for more than 15 years, greeting everyone who comes into the JCC with a smile, a joke, and a “How are you?” And when people ask after him in kind?

“You know, the same as yesterday,” is his response.

Becker began volunteering once he retired as purchasing administrator at BCS Insurance. In addition to greeting people each morning as they walk through the doors, Becker files and organizes the hundreds of paper program registrations that the JCC handles each week. His two-hole punch has a hallowed space in the adult program office.

When he’s not volunteering at the JCC, he’s running off to one of his many other volunteer positions in the community. His efforts have inspired his family to become engaged in community service: his daughter, Barbara Hochwert is president of the JCC of Chicago’s Women’s Auxiliary, and his son-in-law Stuart Hochwert is the JCC’s immediate past president of the board of directors.

“Better to work for nothing than do nothing,” Becker told the Chicago Tribune when he was interviewed about his volunteering. “Staying active and involved is an excellent way to stay young and lead a more meaningful life.”

“He has a place in our hearts.”