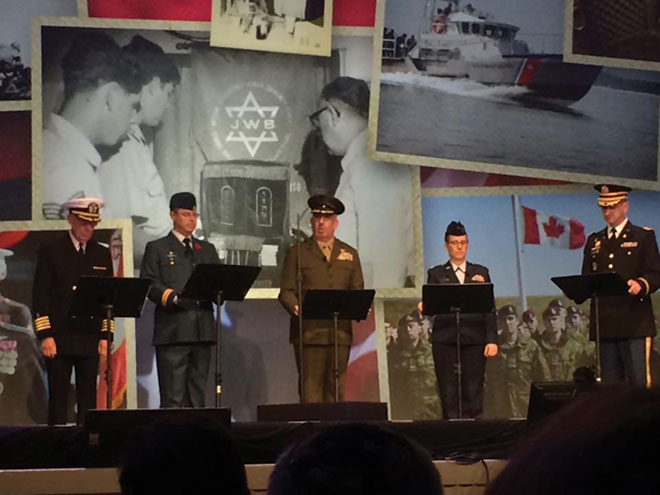 Four JWB chaplains, each representing a branch of the United States armed forces, and one Canadian chaplain, Capt. Bryan Bowley, Royal Canadian Air Force, spoke of their personal experiences providing support and succor to the Jewish men and women who serve to protect our freedoms.

Soussan had never dreamed he would serve as a chaplain. An academic in England, he thought the notion was crazy until 9/11. “The next thing I knew, I was flying into Kabul,” he said during the ceremony, recounting not only how he offered solace, but also served as an emissary of sorts in this Muslim country.

He told of his first assignment, leading a memorial for two Jewish soldiers killed in action. Dressed in full tallit, before rows of U.S. and Afghani soldiers, some feared for his safety in the “middle of a war-torn Muslim country,” he said. 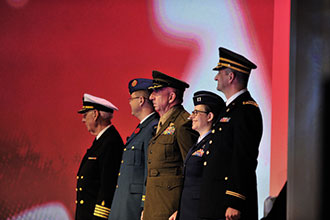 “But the most surprising thing happened that evening, when I sat up all night with Afghani soldiers who reached out to me after the service, answering their questions about Israel, about Jews,” he said. “At that moment I truly felt like an ambassador of the Jewish people.”

The program recounted how Jews were present in the military dating back to the Revolutionary War that put America on the path toward independence. Some of the stories were lighter, recounting some of the day-to-day trials of being a chaplain. Simon spoke about flying 200 kosher chickens into Tokyo for Passover in 1959.

“Let me tell you, flying in 200 kosher chickens was a project, not to mention finding the right people to shecht [kosher slaughter] and pluck them in time,” he said. “A big wind came roaring through just as we were finishing up. The people of Tokyo must have wondered that day: What were all those feathers? Let’s just say it was a sign that the Jewish chaplains were hard at work.”

The plenary featuring the chaplains was a highlight for Stephen P. Seiden, chair of JCC Association, of which JWB Jewish Chaplains Council is a program. “Paying tribute to the men and women who have and continue to serve us in the military as part of the GA was an honor,” said Seiden. “It was a moving tribute and allowed others to learn of the impact our chaplains have every day. Members of the Jewish community need much greater awareness that Jews are, in fact, in the military.”