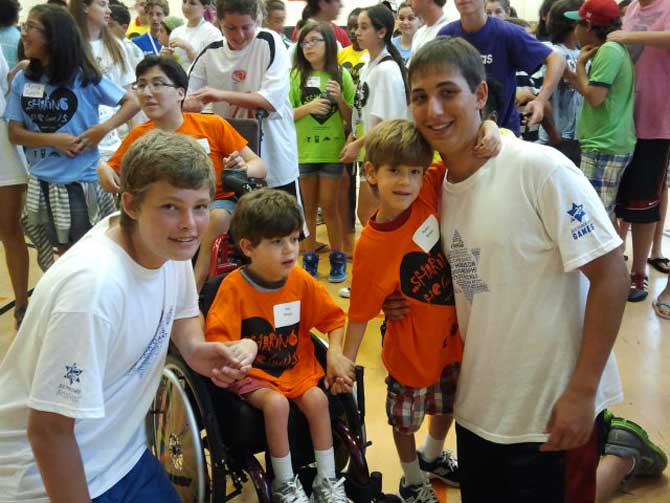 What happens when you bring a bunch of athletic and artsy teens together, mix them with a nationally recognized ballet company and a renowned educational dance program, and shake with a dash of community service?

“We have always had an understanding that it’s not a one-shot deal,” says Kathy Parven, a former JCC volunteer recently hired as the organization’s JCC Maccabi coordinator. “If we are going to make a mark, we need to open people’s eyes.”

Houston, having hosted the Games five times, was no stranger to the JCC Cares program, formerly known as “Days of Caring and Sharing.” In 2007, the JCC ran a literacy program so that every teen participating in the Games would have a one-on-one experience with helping. Parven was pleased with the results, but wanted to do something different when 2012 rolled around and the Houston J would be running both ArtsFest and the Games.

If we are going to make a mark, we need to open people’s eyes.

A hard-core dance fan in a city with a top-tier ballet company, Parven went straight for the top. She asked the Houston Ballet to partner, so that the JCC would have access to their studios for training instructors. She approached the National Dance Institute (NDI) in New York, founded by Jacques d’Amboise, as a way of teaching dance to anyone, no matter their ability or background.

NDI sent a musician and an instructor to Houston to run training. During the week of the Games, teens worked with the dance instructors and the children attending Neighborhood Centers at those sites, helping to coach creative performances from the kids in the program.

With enough funding to keep the program going for two years, the JCC decided to do so. And while there are no longer JCC Maccabi athletes and artists participating, the program has left a mark and helps fulfill the JCC’s mission of serving the wider community.

Yolanda Smith, community youth leader for Ripley House Neighborhood Centers, said that when JCC Cares  ran in 2012, it was “an awesome experience for my kids to see everybody come from around the world and be in one place; to be able to learn about each individual, the life they lived.”

Through workshops and a performance, the kids, age 7 through 13, did just that, learned about a wide world beyond their doors, she says. And now, benefitting from the way the program has been continued, they have had two years of crafting their own performances, working not only with trained dance instructors, but also arts educators from the city’s Museum of Fine Arts.

The program has provided children who do not necessarily have access to high-level arts education with a way to exercise their creativity. The program ran in 2013 for a week in June and a week in August at the JCC, and culminated in a performance for parents.

This past summer the program ran for two weeks at Ripley house, so that participants’ parents would have easier access to the final performance. The theme was “The Seven Wonders of the World.” Children learned songs, learned words in different languages associated with different national landmarks around the globe, ate foods from those countries, and of course, learned to dance.

“They take away a greater sense of self-esteem,” Smith says of the children in her program. “One student wouldn’t participate, he wouldn’t talk at all, but in the performance, he was in the very front. He laughed and he danced.”

Parven is now writing grants seeking funding so that the JCC Cares program can continue serving Houston’s children. And the Houston Ballet, meanwhile, has continued, running it as an afterschool program year-round.

“As much as I wish it were all ours, we did what we set out to do,” Parven says. “We got it to the kids we needed to.”