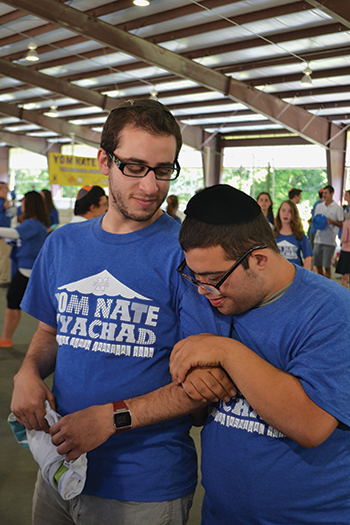 There is really nothing quite like hearing hundreds of children in identical blue shirts singing “Hatikvah.” But when I listened to them at NJY’s Camp Nesher, a Modern Orthodox camp in Pennsylvania that is part of the JCC Movement, the moment was more throat-catching than usual for me.

The kids threw their arms one around another. Some were able bodied. Some were in wheel chairs. Others had varying degrees of developmental disabilities. They were all part of Yom Nate, an event held in memory of a Nesher camper, Nathaniel Cohen (no relation) who had lived with muscular dystrophy and died at age 27. Yom Nate brought together campers from other camps that host Yachad programs for those with developmental disabilities. Yachad is an international organization that promotes inclusion. NJY Camps have their own Yachad campers, but on Yom Nate, they open their gates and hearts and host a big carnival. And children who don’t normally get to attend an inter-camp travel day, have the fun of doing what so many overnight campers take for granted. NJY Camps boast seven camps including: Nah-Jee-Wah for kids in grades 1-6; Cedar Lake for those in grades 7-9; TAC (Teen Age Camp); Round Lake for those with learning differences and spectrum disorders; Nesher; and Camp Shoshanim, an all-girl camp catering to very observant Orthodox campers.

The array of offerings was astonishing. Cedar Lake and Nah-Jee-Wah were having specialty camps while I visited, a week for which campers pay extra, to get intensive training in a variety of sports and disciplines. These rival the offerings of private camps and allow NJY campers to work with experts, such as former Yankee Ron Blomberg and four-time Olympic gold medalist, swimmer Lenny Krayzelburg. The camp partners with the Israel Tennis Centers and Maccabi Great Britain Soccer for expertise in those areas and with Ben-Gurion University of the Negev, Israel’s Wingate Institute and 92Y to offer high-level science, physiology, robotics and arts. 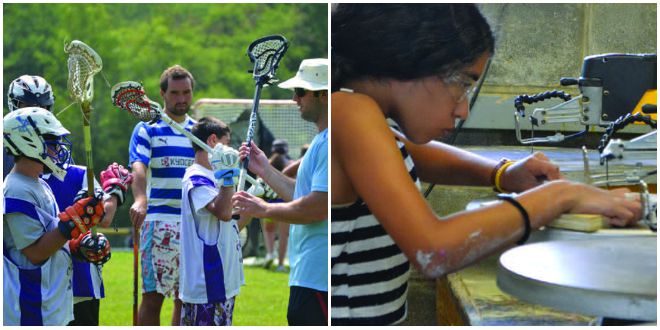 But for Executive Director Len Robinson, all of that is for naught if the camp does not remember that it has, first and foremost a Jewish mission. Before we embarked on our daylong tour of the various camps, he points to a poster on the wall, all black, except for the signature of modernist artist Marc Chagall centered, in white.

The poster, he says, came from the Judisches Museum in Rendsburg, Germany, a small museum housed in a former mikveh, a Jewish ritual bath, that survived World War II. Three elderly women ran it when he visited. He likes the poster because it stands in contrast to Chagall’s usually colorful oeuvre, and it represents to him the camp’s mission, of not letting Hitler’s Final Solution to eliminate Jews have the last word. We can’t be complacent, he notes, through assimilation and disinterest.

By involved, Robinson doesn’t mean religious. But the camps certainly do intend to instill Jewish pride, through a focus on Jewish role models and heroes, and a sense that Shabbat is a different day through singing, services and a break from the week’s routine. At Nesher and Shoshanim, Jewish observance is fully Orthodox, with daily davening (praying). In mid-summer, Shoshanim girls fasted and led their own torch-lit Eicha service, because as the camp’s charismatic director, Esther Staum Katz, insists: “Why not? Why can’t girls do it? I stress that they have a voice and they have choice.”

According to both Robinson and Katz, an Orthodox camp flying under a JCC banner was a hard sell at first. “It was 10 years before we could use the NJY logo on anything to do with Nesher,” Robinson says. Staum concurs that being a JCC camp did not make Shoshanim an obvious choice for parents when the now six-year-old camp got started with just 100 girls.

Today Shoshanim is nearly quadruple that number. So while you might not think that an Orthodox camp and a JCC mission go together, when you see it in action, it works. There’s something incredible about NJY’s effort to create Jewish learning and living at so many different levels, as the camps strive to meet the needs of Jewish children in all their diversity. The camps may be separate, but they have much in common as they do what JCC camps do best: Offer campers a secure place to explore, to try new things, to take risks and to find what it means for them to be Jewish out of the comfort and confines of their home.

The inclusive spirit of the NJY camps is unlike much else in contemporary Jewish life. From the way children with disabilities can participate, to the way the camps endeavor to create meaningful Jewish camping experiences for children of so many different styles of observance, it gives real meaning to the words k’lal Yisrael, or “the whole of Israel.” And it doesn’t feel like any accident to me that this takes place under a JCC banner. JCCs may not always succeed at providing for the entire Jewish community, but they strike me as one of the very best places from which you can try to do so.

And it means that Len Robinson, when he points to that dark poster—so unlike Marc Chagall, with his bright daubs of color, prancing goats and flying fiddlers—has found where the color lurks. It’s in the everyday experiences of Jewish camp. And they are very much doing their job.