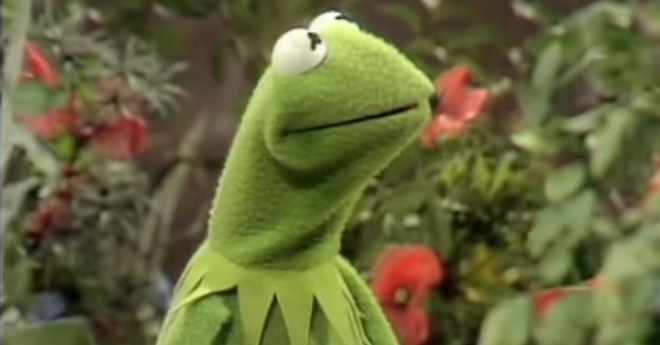 It’s not easy being green.

Kermit said it. Van Morrison said it. Even Ray Charles said it. Now JCCs are saying it too, even if it’s not always easy.

It’s not that easy being green
Having to spend each day the color of the leaves
When I think it could be nicer being red, or yellow, or gold
Or something much more colorful like that

When “Bein’ Green” streams across the Sounding Board transom, I hear two messages JCCs across the continent are taking to heart. The first likely has little to do with the original intent of the tune. But in the spirit of a conversation many of us had at Professional Conference about how the ancient art of midrash informs leadership — how we demand meaning from our sacred texts just as these texts demand meaning from us — it’s reasonable to curl the message of “Bein’ Green” towards a contemporary concept that was just blossoming in cultural consciousness when this song was composed: How do we wrestle with what it means to be responsible caretakers of the natural world we inherit? It’s not easy goin’ green — but it’s a struggle many JCCs have entered with gusto; some are achieving great success as they go green.

Recently the Marcus JCC of Atlanta was awarded major support from the Grants to Green program administered by the Community Foundation to support its work towards sustainability. Our friends at the Staten Island JCC and 14th Street Y were just a few of the many organizations whose participation in UJA Federation of New York’s Jewish Greening Fellowship led to major community projects, new funding streams, and great press touching upon work with solar energy, composting, and recycling. I’m looking forward to a visit to Pittsburgh in June to help think about what that community can do with the 100 acres of land it stewards. Urban farms have emerged in Detroit and Chicago. Boulder Jewish Community Center will boast a farm on its brand new $27 million campus. Staff from the Lawrence Family JCC in San Diego and I are slated to enjoy a morning on the Leichtag Foundation’s Ranch in a few weeks as we dream about how the environment, Jewish meaning and the arts can coalesce. And then there are our good friends at Hazon, with whom we are cooking up an exciting new continental initiative. Hazon’s Community Supported Agriculture (CSA) projects, food festivals, and even a Topsy Turvy Bus already richly color the Jewish communal landscape, touching many JCCs, Ys and camps along the way.

It’s not easy pledging short-term resources toward long-term plans ensuring sustainability. It’s not easy responsibly repurposing the bricks and mortar our communities worked so hard to build over many generations. And yet, when it comes to these challenges, JCCs are taking risks in practical matters of greening, and so much more, as expressions of communal vision and aspiration.

The original intent of “Bein’ Green” was not necessarily environmental, but rather aligned with what might have been the core message of Kermit’s (and Van the Man’s) generation: Be yourself. This is a message worth reflecting upon in context of JCCs as well.

Over more than a century, JCCs have continually reinvented themselves to meet the needs of the communities that need them. Greening is one of the many ways JCCs can be hubs of connection and meaning in ever new and important ways — even when that means enhancing what they were before as a means of reimagining what they must become.

So many in the JCC Movement would agree with what a great frog once said: “It’s not easy being green, but it’s what I want to be.”