At Iwo Jima, a call to serve 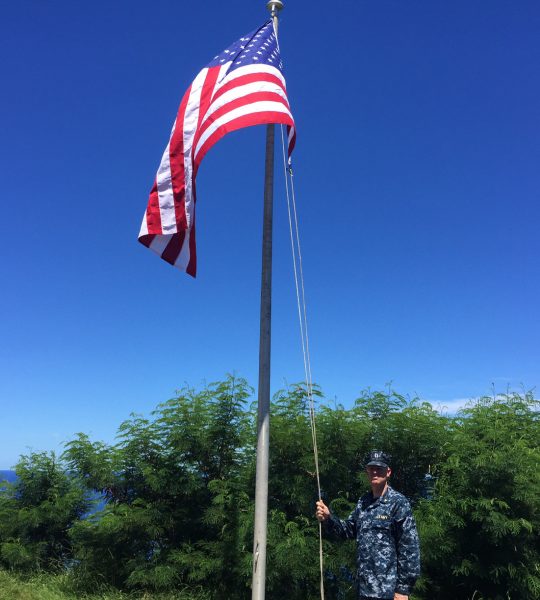 Yesterday afternoon, I had the opportunity to join several other sailors and marines in raising the U.S. flag over Iwo Jima.  I was selected for the flight, and the honor of raising the flag at the site of the famous [Joe] Rosenthal photo atop Mt. Suribachi.

In honor of our late colleague, Roland Gittelsohn, I left a Navy rabbis challenge coin at the foot of the memorial there.  Many colleagues may not know that Rabbi Gittelsohn was the Jewish chaplain present at the landing and battle for Iwo Jima.  In that battle, which lasted almost six weeks, nearly 20,000 of the 21,000 Japanese defenders of the island were killed along with nearly 7,000 U.S. soldiers and Marines.

Rabbi Gittelsohn was assigned to the 5th Marine Division.  He was the first Jewish chaplain ever assigned to serve with Marines.  After the battle, he was chosen by Chaplain Cuthriell, the command chaplain, who was Protestant, to deliver the eulogy at the memorial service for all of those who perished in the battle to take the island.  The other Protestant chaplains, and the Catholic chaplains, objected and refused to participate in an interfaith ceremony, and objected to a Jewish chaplain praying over the graves of Christians.  In the end, three separate services were held.  Three Protestant chaplains attended the Jewish service to protest the behavior of their colleagues.  Gittlesohn’s eulogy was printed, and hundreds of the Marines on the island took copies with them, and shared it with others.  Eventually, the sermon made its way to reporters and the media, and was published across the country as THE “final word” on the casualties in this terrible battle.

Some of his words still ring true today:  “When the last shot has been fired, there will still be those eyes that are turned backward not forward, who will be satisfied with those wide extremes of poverty and wealth in which the seeds of another war can breed.  We promise you, our departed comrades: this, too, we will not permit.  This war has been fought by the common man; its fruits of peace must be enjoyed by the common man.  We promise, by all that is sacred and holy, that your sons, the sons of miners and millers, the sons of farmers and workers-will inherit from your death the right to a living that is decent and secure.”

Today our Jewish men and women in uniform do not have to worry about discrimination because they are Jews.  But sadly, too many of them will never see a Jewish chaplain, because too few of us choose to serve the sons and daughters of the working class who make up the majority of those who serve.  Once upon a time, there were dozens of Reform rabbis serving in uniform.  Today, there are fewer than a minyan.

As Jews, when we do not participate in one of the core institutions of our democracy, we ignore our duty to our nation.  Many of those rabbis who served went on to important careers in service to congregations, and as powerful voices in the Civil Rights movements, community leadership, and as leaders in the CCAR.  Today, when so few of our national leaders have the experience of living side-by-side with Americans of different backgrounds, social classes, races, religions and political parties, it has become too easy to pursue only that which is best for me, and those who agree with me.  Our nation is divided as it has not been in generations.  The divide will not be healed by more demonstrations, money spent on campaigns and ugly and hateful commercials, or politicians placing party above country.  It will be healed when our citizens decide that they will come together to risk life and limb to continue the experiment begun 241 years ago, with the idea that liberty is worth even life itself.

I thought of these things yesterday, as I looked over the landing beach on which so many young people gave their lives.  These young people did not have the chance to grow old, complain about their aging knees and stiff backs, their stock portfolios and retirements, Fox News and CNN.  They gave everything for us, so that we could have the chance to do these things.  How many in our country are willing to give so much so that our grandchildren will have the same opportunity?

Rabbi Steven Ballaban is the senior chaplain in Atsugi, Japan, an airfield outside of Tokyo.