How JCCs use the new brand to tell their tale

When JCC Association rolled out new branding at the 2014 JCCs of North America Biennial Convention in San Diego, we had created the foundations, but JCCs needed to make it their own. We understood that JCCs had evolved, and so too, must the brand. Today’s most successful brands tell their stories—at every possible interaction. The best stories and their brands evoke an emotional response; this makes them more distinct from the competition, but also creates an emotional connection, or relationship that continues beyond a financial transaction. For lifestyle and service brands these relationships are their lifeblood.

Fast forward to March 2015’s JCCs of North America Professional Conference, where we showcased all the varied ways JCCs can best tell their stories—and now we’re seeing the results. Here are two approaches, one from the Shimon and Sara Birnbaum Jewish Community Center in Bridgewater, N.J. and the other from the Aaron Family JCC of Dallas, Texas.

A picture paints a thousand Js 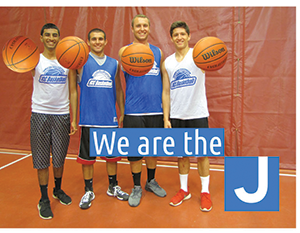 What do you do when four teenage boys want to be famous at your J? You put them on a wall of course!

We didn’t start that way, with a bunch of teens literally hanging on the wall in our hallway gallery, but that was where “We Are the J,” our photo campaign to show the essence of the Shimon and Sara Birnbaum Jewish Community Center ended up.

It all began, however, when I attended training for using the new J Brand in the New York City offices at JCC Association. The idea grew out of that and our JCC created a photo campaign for our main hallways. The campaign was designed to showcase the many programs offered at our JCC, and it featured the wide range of age groups that we service, all while utilizing the new JCC brand.

We compiled a variety of photos that we already had in-house, and in addition, asked our JCC participants to submit a photo they would like included on our “wall of fame.” We didn’t have a lot of guidelines involved, just that they submit something that showed them doing their favorite activity at the JCC. We pretty much left the rest up to their imaginations. 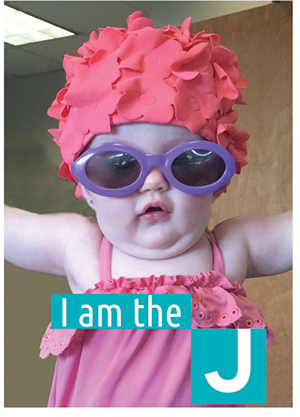 We got the word out through Facebook and e-blasts. We did get a number of member submissions that we used. And we were able to use all the ones we received.

That’s when those teenage boys approached us. They came into the office, and said, “We are the J, too…how do we get our picture on the wall?” So, we immediately took the photo of the teen basketball players and yes, they were added to the photo gallery!

The photos depict mah jongg ladies, and kids in the pool. There are families and friends, and babies, bubbes and ball players. Some are warm and sentimental, and others make you laugh out loud. They definitely are the J!

We plan on expanding the photo gallery as more of those special photos come to light. In addition to appearing on the walls of our JCC, we have displayed the “We are the J” photos at several fundraising events to tell the story.

People have loved the photos. And the people who were featured in them have asked if they could have the large photos when we took them down. They understood when we explained that the gallery would be returning to our hallway, so that we can put them back on the wall.

Bringing JCC participants into the process helped us weave a rich, full JCC story with these pictures. And it also allowed us to tell those stories in a unique way that engaged the very people whose stories make up the essence of the J.

Debbie Golden is special projects and marketing director at the Shimon and Sara Birnbaum Jewish Community Center in Bridgewater, N.J.

Deep in the heart of Dallas

JCC MaccabiTM gets a lift from personal storytelling
Ashley Bundis 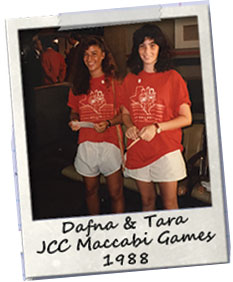 This idea to tell our story came from two different inspirations. The first was a direct result of the JCC preparing for and promoting the JCC Maccabi Games, which we will be hosting in August. After creating endless marketing materials in support of the Games, it was time to make a more personal plea. Watching our housing committee chairs, Tara Ohayon and Dafna Rubinstein in action, I would see them make a personal “ask” by going up to their friends and colleagues and convincing them to be a host family! It makes all the difference when people are asked by someone they know in this personal manner and given the time to understand the importance of being a host family. It makes the “ask” real and heartfelt, and people are persuaded by this approach.

Around the same time in March, our staff had just come back from the JCCs of North America Professional Conference. During our all-staff meeting, everyone who attended was given the opportunity to share highlights from the conference with the rest of the staff.

“We were honored to be one of the highlights during the early educational talks,” said Tara, who is also the JCC’s early childhood education director, when it was her turn. “In order to prep for this presentation Mark Horowitz [JCC Association’s vice president, early childhood education and family engagement] said we should just ‘tell our story’—the good, the bad, the ugly, the sensational.

“And that is what we did,” she continued. “And the response was overwhelming. Teachers from all across the country felt connected to us, intrigued, eager to learn more and we couldn’t wait to do so. The message I want to give to all of you is instead of selling your programs through mainstream advertising and putting out pricing and a tagline—instead, tell your story. Take a moment where someone made a difference, find an event where sports were the leader and smiles were the outcome. Our job is to provide state-of-the-art programming; therefore, in order to get people on board they have to trust us and the first step is to share who we are and why our programs are special.”

After those two big ideas sunk in, we knew it was time to take a personal approach toward messaging as we go after host families. If we have our chairs meeting and greeting people and getting them “on the JCC Maccabi bus,” why can’t we do that through an email?

Tara and I met about just this and we had a “brain explosion”(our term for intense brainstorming that leads to awesome ideas/programs/events): Let’s make this a personal letter that tells the story of us. What story could be better than that of our two chairs who used to be JCC Maccabi friends, then college roommates and are now chairing the host committee together? I agreed, and we talked about photos from the past that could add an Instagram feel to it. Then, when it all came together the marketing team said we needed a header. We needed a hashtag that would contemporize this whole plan. That’s when #MFF—Maccabi Friends Forever—came to life.

This story was truly about what the Games do best: Two friends who have been together for more than 20 years because they connected at the JCC Maccabi Games. Tara and Dafna were our poster children for Maccabi Friends Forever or #MFF. We want this to have a future, or be a trend, something that other hosts of the JCC Maccabi Games can use and adapt and that can catch on with the teens during the games.

And it all came about from noticing how well people respond to stories that are warm and real, that convey the heart of the J, the very essence of what we are.

Ashley Bundis is the marketing services and program director at the Aaron Family JCC in Dallas, Texas. She also was a member of the team that developed the new brand for JCCs of North America.