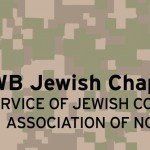 JWB Jewish Chaplains Council, a division of JCC Association, in partnership with the Jewish War Veterans and New York-based members of the American Legion, and with the support of a broad array of Jewish communal organizations, is urging the swift passage of a concurrent resolution in the U.S. Congress to establish a memorial in Arlington National Cemetery in honor of rabbis who died on active duty.

Currently, Chaplains Hill in Arlington appropriately memorializes the names of 242 Christian military chaplains who perished while on active duty. Astonishingly, none of the 13 Jewish chaplains who have died while serving are so honored.  JWB and its partners have already raised the private funds needed for this memorial, but no Arlington memorial can be placed without congressional authorization.

“Members of the Jewish faith have served our country since the days of the American Revolution, and Jewish chaplains have bravely served alongside,” said JWB Director Rabbi Harold Robinson. “Their valor should be remembered in the same way that other chaplains are remembered. We hope all Americans who hear of this effort will call their representatives and senators and ask them to co-sponsor this resolution.”

N.Y. Representative Anthony Weiner and N.Y. Senator Charles Schumer have introduced resolutions in the House of Representatives and the Senate to authorize the memorial. Thirty-four organizations from all corners of the Jewish community are urging representatives to support H. Con. Res. 12 and S. Con. Res. 4. There are now approximately twenty-five congressional co-sponsors of the concurrent resolutions. “I am proud to have the opportunity to strongly support the memorial to honor the memory of the 13 Jewish-American chaplains who heroically lost their lives in World War II, the Korean War, and Vietnam,” said Congressman Steve Rothman (D-NJ).

One of the transformational moments in American life was the heroic sacrifice of the four chaplains of the USS Dorchester, which was transporting 900 soldiers and civilian workers to the European front when it was sunk by German torpedoes off the coast of Greenland on February 3, 1943. Each of the four chaplains on board spontaneously gave his lifejacket to another soldier, and the chaplains perished together as they prayed and sang hymns to men in lifeboats and in the icy water. The chaplains represented three faith traditions—two Protestants, a Catholic, and a Jew—and their death marked the first time the term “Protestant, Catholic and Jew” was used to describe America. Three of the four are memorialized on Chaplain’s Hill, but neither Rabbi Alexander Goode nor any of the other rabbis who died in other active service situations are so remembered.

The project was initiated by Ken Kraetzer’s discovery that Jewish chaplains were not memorialized on Chaplains Hill in the same way as others. A member of Squadron 50 of the Sons of the American Legion, in Pelham, N.Y., Kraetzer was doing historical research on memorials in Rhode Island. He was familiar with the story of the USS Dorchester, which the American Legion focuses on annually in commemorations all over the country, and wondered why Rabbi Goode was not among those listed at Arlington.

JWB Jewish Chaplains Council urges all Americans to express their support for a memorial in Arlington to their elected representatives.