For the past few weeks, Israel has gone through a historic period. Hundreds of thousands of Israelis are in the streets, protesting against social injustice, and many more Israelis are supporting their cause. For many Israelis, especially younger ones, this mass movement reflects a moment of pride.  The Arab spring rose on the wings of social media and Facebook. In Israel, the call of the middle class for change and reforms in social policies has united all sectors of society: Jews, Arabs, students, retirees, the poor, the middle class, secular, Orthodox, left wing and right wing, residents of large cities and those who live in border towns. All cry out in one voice: we need a change in the social and economic system in Israel!

Israel was established as a socialist state, with very generous social benefits for its citizens. In the 1980s, the economy moved to a more market-oriented capitalist model, which made for greater prosperity overall but a growing income gap between the small percentage of rich Israelis and the larger number of middle-income and poor. The cost of food has skyrocketed in the past three years, and the cost of housing even more. Whereas at one time, an average worker could buy an apartment for the equivalent of three years’ wages, now it would cost the equivalent of 25 years’ wages.

The current crisis began four months ago, when public hospital physicians demanded changes in the health system, including shorter shifts, more staff, beds, medical equipment and infrastructure nationwide, to match the OECD (Organization for Economic Cooperation and Development) standards. Since then, negotiations have gone on with no real breakthrough, and recently the nurses’ unions joined the strike as well. Israel Medical Association Chairman Dr. Leonid Eidelman began a hunger strike to express his despair at the situation. Last week, over 1,000 medical residents, along with a few hundred specialists and department managers, took their struggle to the next level and staged a mass resignation. The expressed hope is that during the 30-day period before the resignation letters take effect, there will be a breakthrough and the public health system will begin to function again.

Four weeks ago, a few university students decided to move into tents on the historic and elegant Rothschild Boulevard in Tel Aviv as an act of protest against the dramatic increase in the cost of living, especially rent.  These few tents rapidly increased until thousands of Israelis from all backgrounds and affiliations, from the northern areas of the country to Eilat in the south, had become involved.

Today, as the “tents” protest has grown to be visual proof of social discontent, the movement has drafted a list of demands:

* They want to bridge social, economic, national and gender-based gaps.

* They want the state budget to provide for the basic needs of the citizens.

* They want reduced housing costs, policies that result in full and fair employment, and government supervision of fundamental products.

* They want the state to give preferential treatment to those on the social and geographic periphery—immigrants, the poor, the elderly, the disabled, etc.

*They want state investment in education, health, personal security, and such.

* They want real solutions to the vital needs in the fields of housing, transportation, and public infrastructure.

On the evening of August 6, one of the largest demonstrations in the history of the state took place, with 300.000 people marching in the streets of Tel Aviv, Jerusalem and other cities, calling for social justice and supporting the tent residents. The protestors were joined by leading Israeli musicians such as Shlomo Artzi and Rita. Public opinion in Israel, including leading musicians, authors and journalists, is overwhelmingly in favor of this protest. This historic march was probably one of Israel’s most inspiring moments, as Israelis from all sectors joined to express their demand for a fairer society, and did it with no violence or aggression. Israelis residing in the US demonstrated their solidarity and pitched their own tents in New York’s Times Square and in front of the White House in Washington.

The protest grows daily, as more and more groups join the stream. The latest to join are senior citizens, asking for an improvement in their living conditions under the banner “Do not cast me aside in my old age.” Israel’s pension allowance stands at NIS 1,444 (roughly $409) per month, and NIS 2,111 (roughly $598) for a couple. It is the smallest pension of all OECD countries, aside from Mexico. While Israel’s retirement age for women, 62, is close to the OECD average, the retirement age for men at 67 is the highest in the West, alongside Iceland and Norway.

As a result of the growing demonstrations, Prime Minister Binyamin Netanyahu formed a team to meet with the protesters. Netanyahu says he is willing to modify priorities in order to lighten the burden on citizens. The committee will submit their recommendations to the government by mid September.

When the news in Israel focuses on the economy rather than terror and war, it’s a relief of sorts. After 63 years of independence, we’re glad to be arguing about the moral and social values of the state, and we hope that the never-ending war of existence is behind us, and we can turn our face to a brighter future.

Wishing all of us a better tomorrow 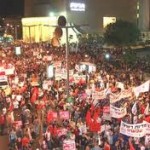