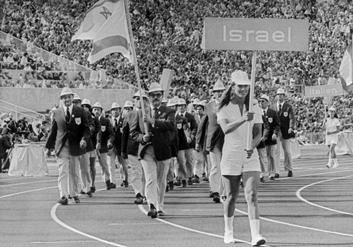 The 11 Israeli athletes murdered at the 1972 Olympic games in Munich will be remembered officially at the 2016 Rio de Janeiro games.

The International Olympic Committee (IOC) decided to create space within the Olympic village dedicated to the memory of the 11 Israelis, who were kidnapped by Black September terrorists and murdered during a botched rescue attempt on Sept. 5, 1972 during the Munich Olympic games. As well, IOC President Thomas Bach said that there would be a “moment of reflection” during the closing ceremony of the Rio games dedicated to those who had died previously during them.

The Munich 11 family members, led by Ankie Spitzer, who lost her husband Andrei in the massacre, have lobbied for a minute of silence at the opening of the Olympic games since the Montreal Olympics in 1976. Until now, the IOC has refused to acknowledge the Israelis in any official capacity.

Since 1994, JCC Association has made remembering the Munich 11 a part of each set of JCC Maccabi Games™ and later, ArtsFest™. Each host community decides an appropriate way to commemorate them, but it is an integral part of each opening ceremony to remember the slain Jewish athletes.

“We felt it was important from the standpoint that the Games are an athletic event for Jewish teens to remember these Jewish athletes,” says Arnie Sohinki, JCC Association’s senior vice president of program services. “It has become an important piece of each opening ceremony.”

In 2012, JCC Rockland dedicated its Games — which would be taking place near the 40th anniversary of the massacre — to the memory of the 11. In the lead up to the Games, the JCC initiated a petition to lobby for a minute of silence at the opening ceremony of the 2012 Olympics in London. The petition had worldwide support, including JCC Association’s, with more than 112,000 signatures, and the JCC delivered it directly to then-IOC President Jacque Rogge, who refused the request.

“It was very gratifying to see how JCC Rockland took something we had started and really move it forward, and how the JCC Movement came together to support it,” says Sohinki. He remembers when he served as executive director of the JCC of Greater Washington and hosted the Games in 2004, the very moving meeting between Anouk Spitzer, Andrei’s daughter Jim McKay, the ABC sports announcer, who covered the 1972 Olympics, and delivered the terrible news to a waiting world.

“We’re really very pleased that the efforts of the JCC and the families succeeded,” he says. “It looks like this time, the IOC finally heard us.”