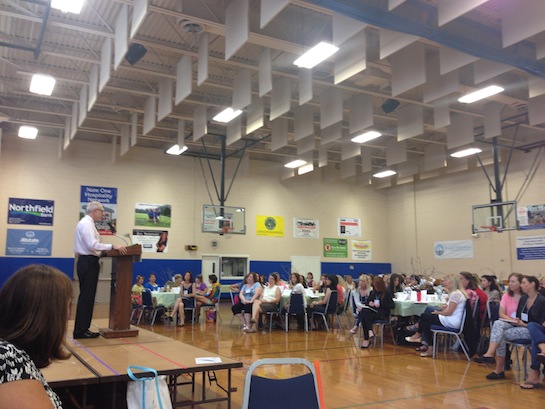 What do you get when you combine Jewish learning, educators who are passionate about their profession and regional connections?

You get A Day of Learning on Sept. 2 organized by educators at three New Jersey JCCs: Kaplen JCC on the Palisades in Tenafly, JCC of Central N.J. in Scotch Plains, and JCC MetroWest in West Orange. The conferences, which attracted 170 educators from the regions, was based on JCC Association’s Sheva, an education initiative of seven (sheva in Hebrew) core elements based on the latest research in early childhood development.

“This was 100 percent worthwhile,” says Jo Sohinki, early childhood director at the Kaplen JCC, where Sheva has not only changed how the JCC looks at its early childhood curriculum, but also how it approaches staff training and meetings.

That resulted in the three large New Jersey JCCs meeting in the spring. The directors each brought along some of their educators along; and so the ball got rolling. The result: a Day of Learning incorporating Sheva throughout, aimed squarely at and run by those who use it in a daily setting.

Since then, teachers have visited each others schools and participated in Google hangouts, creating their own learning communities, according to Mark Horowitz, vice president, early childhood education and family engagement. The successful event was a first of its kind for JCCs, creating their own network built on the Sheva connection.

“Teachers take their learning home to their staff and then to parents,” said Horowitz of the snowball effect the learning has. “And this all branches out of the value pulled form traditional Jewish text, study and stories.”

As for the teachers? It looks like they’re ready for a second day of learning.

“This was a great opportunity to work with other teachers,” says Jessica Friedman, a teacher at Kaplen JCC. “It opened my eyes to new ideas, things I haven’t even thought about.”