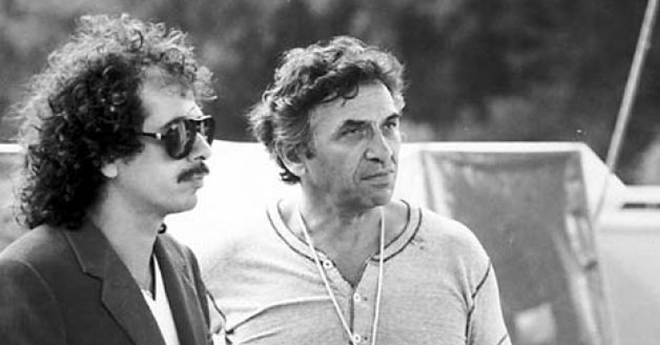 “No running, no yelling.”

That’s what Bill Graham — the great rock and roll promoter, cultural impresario, and purveyor of songs of love, peace, joy and revolution — used to say before the events he presented. Graham was an orphan of the Shoah — born Wulf Wolodia Grajonca — who came to America and, as is celebrated in an exhibition at the Skirball Cultural Center in Los Angeles, not only lived a great American story, but also was one of the creators of the contemporary American story.

Graham invented the live rock show in the Fillmore Auditorium in San Francisco, and shaped the sensibilities of modern entertainment through Live Aid (the 1985 concerts supporting Ethiopian famine relief) and beyond. While extending our Sounding Board visits to eight JCCs, and taking time to listen to many JCC professional and lay leaders, along with other supporters of Jewish life in California this past week, I was able to pay a quick and compelling visit to the exhibition.

Near the exit of the show, which includes displays of rock memorabilia, posters, listening stations, and iconic photos, there sits a large basket of apples. “Take one, maybe two,” reads the sign next to it. Veterans of the early rock scene recall that Bill’s shows featured a similar ending touch — free apples for the audience. This refugee from childhood horror used his coming-of-age as a castaway in Europe, a tough guy in the Bronx and the Catskills, and a frustrated actor in San Francisco to ensure that his hunger for experience and people seeded the generosity that made him one of the architects of community building in popular culture.

Graham died in a helicopter crash in 1991. His memorial concert, “Laughter, Love and Music,” attracted more than 300,000 fans to celebrate his legacy as a convener of people and creator of transformative experiences. If you have ever raised a lighter, shed a tear, surfed the crowd or snuck backstage at the live event of one of your favorite performers, it’s Bill Graham you have to thank. If you grew up with music — especially live music — as the catalyst of all catalysts for bringing people together, you can thank Bill.

“No running, no yelling,” he used to say. Keep the focus on the crowd, not what’s going on behind the scenes. Don’t interrupt the community that the artist and audience are shaping. Stay focused on the joy you can bring, not the hard part of making it happen. At JCCs, this is the prize we need to keep our eye on, too.

With all of its overdone flash and overpriced tickets, rock was and always will be about a sense of life so great that it takes an entire community to fulfill it. In our Jewish Community Centers — like Bill Graham — we follow that same urge derived from whatever twist of Jewish history we have lived. We seek opportunities to build community and meaning for as many people as we can.

Bill Graham’s friend Carlos Santana celebrated his life at his memorial concert with a rendition of the song “I Love You Too Much,” or “Ikh Hob Dikh Tsufil Lib,” in Yiddish, music by Alexander Olshanetsky, lyrics by Chaim Tauber. It was one of Bill’s favorites. He had taught this Yiddish standard to Santana himself — a wondrous and rocking Jewish expression of love, laughter, music and community that reflects our work too.