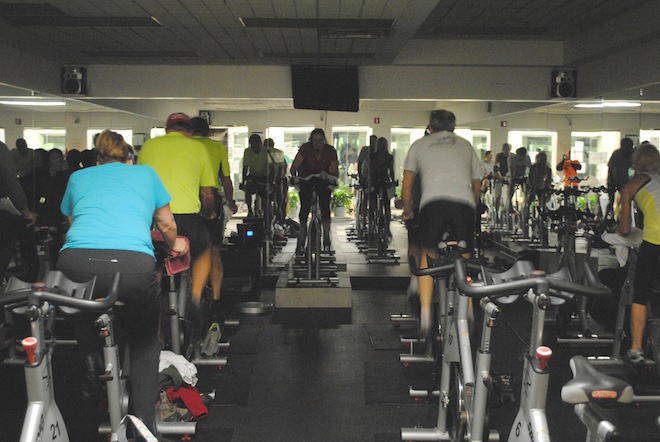 On the sixth day of Hanukkah, JCCs across the continent can take part in Cycle for Good. This group cycling program, which takes place on Sunday, Dec. 21, is in its third year, and this year raises funds for Etgarim, an Israeli organization, founded by former members of the Israel Defense Force, that serves 5,000 children and 700 adults with a wide range of disabilities. And although many JCCs donate all the funds raised to the chosen charity, the program can be a fundraiser for the J, too, with the JCC keeping a portion of what it raises.

It’s a great way of both running an individual program while working as part of the collective JCC Movement, since all JCCs will overlap during one hour during Cycle for Good, no matter what time zone they’re in.

It is also a great way to turn something the JCC already does – spin classes – and turn it into both a fundraiser and an awareness-raiser for the good that JCCs can do.

To give you some idea how it works and what you can do, we asked Tara Stone, assistant director of membership and wellness, at the JCC of Louisville, to offer some lessons and suggestions gleaned from their successful program.

The JCC of Louisville has participated in Cycle for Good since 2012, when it was first rolled out by JCC Association. The first year we raised more than $700 within the five hours of running the program and last year we raised around $875 for the Special Olympics, the designated charity.

I recruit a cycling instructor for each one hour period to lead the class. Our participants rent the bikes for $25 an hour and some of the instructors even donate their pay for the class. In order to create excitement on the day of the event, I posted signs throughout the JCC leading to the cycling studio with different Special Olympics facts in the hopes of motivating members to donate.

I also set up a cycling bike in the lobby with a donation jar and ride throughout the entire event. This has been a successful mode of creating excitement and raising funds as everyone entering the facility walks by and asks what is going on or stops to chat and will throw in a donation even if they choose not to ride.

Last year I was able to build a relationship with a local Special Olympics representative who sat in the lobby and greeted members as they entered and spoke to them about what the Special Olympics does. We also had a bit of a challenge last year because of inclement weather. But we had activities planned for the kids of participants in the gym. They could participate in those for 25-cents as part of the fundraiser.

I also placed an employee outside of the cycling studio with a donation jar for last minute sign-ups as well as to continue the dialogue about the fundraiser for those who just want to throw in a dollar or two.

There have been a lot of different ideas we have tossed around to make it bigger and to get all programs in the building involved but it is really just about talking it up and creating that excitement with our members. We start with the avid “cyclists” and they sign up and talk their friends into it. And then we recruit our avid group fitness participants. We open this event to the entire community and generally send out a press release. The first year I actually got a spot on a local morning show to promote it!

We usually have donations come in up to two weeks after the event as sometimes there are members who come to the J that day, want to donate but don’t have money on them. My goal is to increase participation every year, this year my goal is to hit $1,000.

Find out which JCCs are participating in Cycle for Good 2014!
Subscribe to Announcements