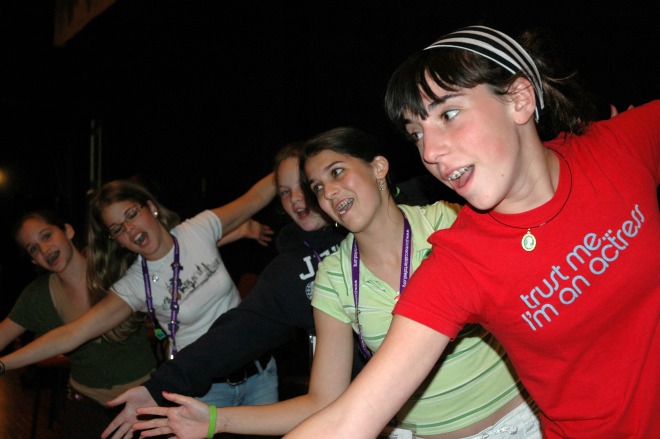 While he may have been a genius alien superstar chameleon freak not-of-this-world, David Bowie, the man who fell to earth, seems to have rocked our entire orbit with the news of his death from cancer at the age 69. Sounding Board turned to Bowie early on, thinking about Jewish life, JCCs and change. Few pop stars or artists of any kind have modeled freedom of body and spirit more than Bowie, who pushed the boundaries of gender, sound and vision in ways that set the pace for generations of youth culture. He was a dreamer and futurist who grounded his tales of wonder in the grit of human longing. These past few days, millions have recalled Bowie as the star who understood what it means to be a teenager—to want to be someone, anyone; to want to transform and be transformed; to be so alone in the crowd that it hurts to breathe. And what did David Bowie say to kids and grown-ups alike?

Even the most loving parent, attuned to the ebb and flow of a teen’s attention, rejection, dependence and rebellion could not offer a better framing for what it means to protect a young soul while setting her free.

We also say goodbye to writer, musician, and theater impresario Elizabeth Swados. Emerging in the bohemian streets of 1970s New York City where Bowie and Andy Warhol and Lou Reed and all matter of boundary-pushers drove world culture forward, Liz made her name with “Runaways,” a Tony-winning Broadway show that embraced the story of society’s castaways—runaway teens. She wrote their stories and found their songs and literally put them on stage. In the decades to follow, she was a champion of a brand of earth-bound, star-gazing, myth-busting theater that always flowed against cultural norms even as she spoke for so many voiceless people who needed her.

Liz graced the JCC world intensely as an artist-in-residence, working with several JCCs during her career. Her work at the YM-YWHA of Washington Heights-Inwood, on the complex story of “Sosua,” brought together teens of varied cultures to work on a project about the Dominican town that served as a safe haven for Jews during the Holocaust and has been widely praised.

At the Makor/Steinhardt Center of the 92Y, I personally witnessed her stay past midnight, without taking a fee, to sit with unknown actors and playwrights struggling to find a voice, popping out for a smoke in her leather jacket after the last young artist had gone, saying that we should let them know they could call her anytime.

Liz was an Artist in Residence at the very first JCC Maccabi and Arts Fest in Baltimore in 2006. Our friend and teacher Josh Nelson, who worked with her then, recalled her last week.

Liz Swados was a creative’s creative. We served together as Artists in Residence at the very first JCC Maccabi ArtsFest; working to build a neo-community of artistically inclined teenagers and professional teaching artists. I particularly remember how deeply Liz inspired her group of student actors… I’ve long been inspired by her example, and I’m very grateful to have shared that time with her.

Is there a better way of demonstrating how deeply JCCs can take on the challenge of offering meaningful experiences and true mentors to our youth than remembering how we brought a radical, relentlessly curious, and imminently gracious trendsetter of the avant garde to the JCC Maccabi program—the signature Jewish teen program in North America for the past three decades?

Thousands of kids enrapt in private wonder and angst will come to St. Louis, Columbus, and Stamford this summer. They will look for friends and a voice, and fun, and a stage to shout out— and a place to hide. Many may not even know what they are looking for, and in the ups and downs of figuring out school schedules, soccer practices, family vacations and budgets and just how Jewish an experience they may want and need, it’s easy to forget how lives can be transformed by a single conversation or experience with someone who can really speak to a teen, who can really hear him or her.

“It’s a God awful small affair,” Bowie sang in “Is There Life on Mars?” maybe the greatest song of teen longing ever written. “Is there life anywhere,” the teenager asks. Yes there is, we answer. It’s right here.