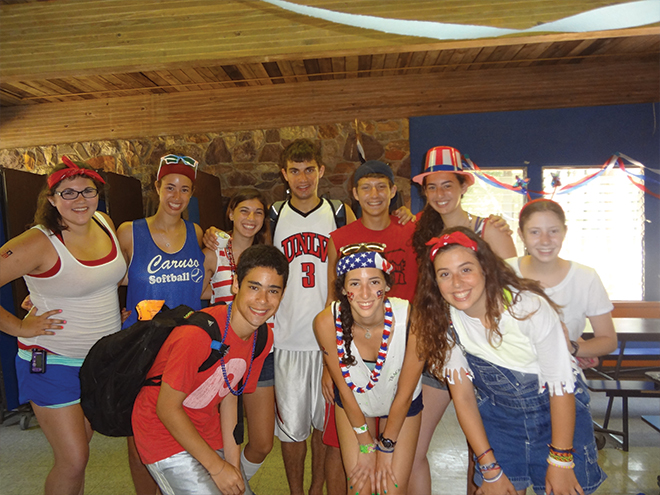 This summer the Fourth of July coincides with Shabbat, a potential challenge when you consider all JCC camps celebrate Shabbat and do something to mark America’s birthday. Will the celebration of one holiday impede the celebration of the other? What Shabbat rituals will have to fall by the wayside for July Fourth and vice versa?

JCC Association’s camping department saw this confluence of holidays not as a challenge but as an opportunity to holistically combine Jewish programming with the camp calendar, and we wanted to encourage the 28 overnight camps in the movement to see it that way too. To help camps think about how they can integrate the two celebrations, JCC Camps partnered with the Mandel Center for Jewish Education and JWB Jewish Chaplains Council, a program of JCC Association, to create a packet of resources called “Shabbat for America,” which was recently sent to our camps. (Email us if you didn’t receive it)

The packet includes activities – an art activity and a camp-wide scavenger hunt – as well as additional prayers and readings to include in Shabbat services and a study guide of texts that includes the Friday night Kiddush, the Declaration of Independence, Emma Lazarus’s “New Colossus” (inscribed at the base of the Statue of Liberty) and more. The art activity will ask campers to think about what it could mean to celebrate a holiday far away from family, and using the Talmudic dictate kol Yisrael aravim zeh bah zeh — that all of Israel is responsible for one another — campers will make holiday cards for Jewish members of the armed forces that will be distributed by JWB.

The scavenger hunt will challenge campers to interact with major figures of American Jewish history from Louis Brandeis to Bella Abzug. The texts and their accompanying questions, intended for older campers and staff programming, raise questions about freedom and independence and explore how Jewish values and ideas can, have, and should play out in America.

The Jewish experience in America is unlike any other diaspora community in Jewish history. We have found unprecedented acceptance, success, and integration in America, and particularly on this Fourth of July, as the celebration of our national independence coincides with a celebration of spiritual independence, we pay homage to all we’ve gained from and given to this country. Even if you’re not lucky enough to be spending your July Fourth at one of our amazing camps this summer, you can still pause to recall the Jewish history in America and to consider what this country means for you – as an American and as a Jew.

Gabe Miner was an intern at JCC Association this past year. He is now assistant director at Pinemere Camp.