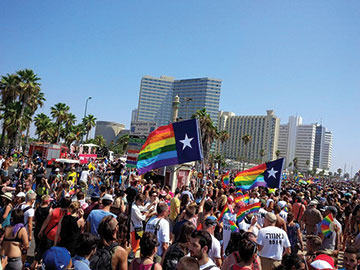 Nyla Harper had never been to Israel. As someone who attends synagogue weekly and volunteers at her JCC in Austin, traveling to the Jewish homeland was something she wanted to do.

But she wanted to go and “just be myself,” she says.

So when Aliza Orent, director of Jewish life and learning at JCC Austin told her she was organizing a trip designed to appeal to the LGBTQ (lesbian, gay, bisexual, transgender and questioning) community, Harper was on board.

“It’s really nice to visit Israel on your own terms,” says Harper. “For me, to be able to go as myself? That was huge.”

Boarding Pass, JCC Association’s travel program, began with the idea of offering trips to Israel that reflect the values of JCCs. The trips are designed to cater to a variety of interests, tastes and niches within the JCC, and beyond, to include members of the wider community.

The LGBTQ trip of 21 participants did just that, according to Orent, who spearheaded the project. Although rooted at the Austin JCC, it attracted participants from other Texas cities, across the country and as far away as Vancouver, she says. The trip took in some traditional sites, such as a tour of Jerusalem and climbing Masada, while also making sure that the group got to participate in the Gay Pride march in Tel Aviv.

“The highlight was watching people experience Israel and be open about who they were and be proudly Jewish and proudly gay,” she says.

“For some people it is not an option,” she notes, with some gay communities being not so accepting of pro-Israel and Jewish sentiments, at the same time that many Jewish groups are not always open to members of the LGBTQ community.

According to Leah Garber, JCC Israel Center’s director, Boarding Pass began as a way to reach an audience that shies away from fundraising and synagogue trips.
“We came up with a model, but we don’t have one program,” she says. “They are tailor made to a specific community and a specific agenda. Some JCCs want to focus on a traditional family trip, some want a mitzvah trip, or a multigenerational one.”

The goal is to build a trip around natural constituencies at the JCC, so that there is a built-in audience ready to pull out their passport when the trip is announced. Interested in food and wine? Have an active seniors group? Arts lovers? 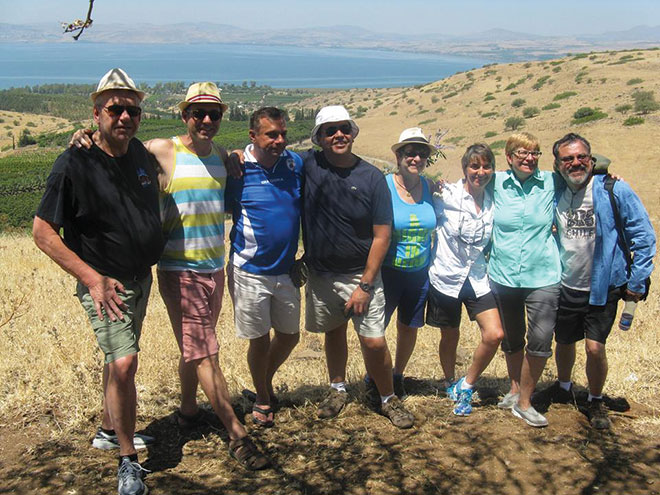 Stuart Raynor, CEO of the Robert E. Loup JCC in Denver, Colo., has run two different Boarding Pass trips aimed at two very different constituencies. The first was an intergenerational family trip that attracted 34 participants in June 2011. The JCC’s shaliach, or Israel emissary, was included from the planning stages. The trip was all about family time and building community, says Raynor.

And what’s in it for the J?

“I’ve yet to have a situation when people didn’t come back motivated to do more programming about Israel and to create some closer relations between Israel and the JCC,” he says. “That has always been the case.”

The JCC’s other Boarding Pass trip was customized for arts lovers. The trip, designed for a small group, attracted 16 people already passionate about the cultural arts offerings at Robert E. Loup. They returned, energized, ready to roll up their sleeves and donate both time—and money, Raynor says.

“Donor cultivation was not how we started this, but in the end, that’s what happened,” he says. “Some have become significant donors.”

The JCC is hoping to run a second arts trip, one that would have a different twist of some sort since many of those who attended the first trip have already expressed interest in a follow up.

What helps make the trip successful is the level of care and resources available to the JCC Israel Center and the dedication of its entire staff, he says. “They take care of all the details. You don’t have to worry a lot about that.”

As for why go at all? “This is who we are. The more people we can help inform and create an experience for and relationship to Israel, the better we are as a JCC and as a people.”

It was the trip of a lifetime from day one.

Sharon Gordon found that out when she offered a Boarding Pass trip to the seniors at the JCC MetroWest in West Orange, N.J. in April. The trip included 33 older adults ranging in age from 65 to 90.

“We have 12 different senior groups in our JCC, and people have been asking for years to go to Israel and we never really did it,” she says. “It was always not the right time, or a variety of reasons.”

But the J offers a wide-range of day trips and had recently moved onto overnight ones for its seniors. They had been successful, so the idea of Israel seemed possible.

Gordon, who has been to Israel 10 times herself, already had in mind what she thought would make the trip successful: staff seasoned in working with seniors; only one hotel change; no one handles their own luggage.

“It really makes a difference that the staff already had relationships with the seniors,” she says. “And the JCC Israel Center staff really made the difference in this trip. The support that they gave us was phenomenal. So while we were four staff, they were like having four more.”

“For this group, they remember 1948,” Gordon says. “It’s very much within their lifetimes. … They were all crying. Those were some of the most powerful moments.”

For Lloyd Kishinsky, 83, it was an opportunity he couldn’t pass up. Kishinsky grew up in the Habonim Zionist youth movement and remembers 1948 well. He had always wanted to go to Israel, but his wife, who died five years ago and had family there, was always fearful.

When this opportunity arose, it seemed like now or never.

Kishinsky, an amateur photographer, took more than 1,000 photographs while there. From visiting the Kotel and putting a note in the wall in memory of his family to exploring the caves beneath the Old City, the trip was everything he could have expected. And having familiar staff from his JCC both sold him on the trip and made it special.

“The average age must have been in the 80s, people with canes and walkers, but no matter where we went, everything was so well taken care of,” he says. “Everybody did everything, like the tunnels, which are not so easy to do. But they took care of us on the whole trip.”

Kishinsky loved heading into Jerusalem on Yom Ha’atzmaut to see the fireworks and all the people in the streets: “Like Times Square on New Year’s Eve when I was a youngster.”

“It was the trip of a lifetime from day one,” he says. “A truly amazing experience.”