JCC cookbook offers ideas for Passover and beyond

What place could better represent the flavors of the Jewish community in all its diversity than a JCC? And if you want to take that at face value, then check out The Community Table, a new cookbook by Katja Goldman, Judy Bernstein Bunzl, and Lisa Rotmil was released by the JCC in Manhattan that celebrates Jewish cooking, classic and contemporary, and all the variety that goes with it.

As the cookbooks’ intro declares:

The cookbook, launched at the JCC on March 24 in time for Passover, and provides ideas for weekday cooking, as well as traditional fare like latkes four ways, kreplach soup and challah. There’s contemporary takes on Middle Eastern fare, such as the Brussels sprouts with pomegranate syrup, featured here, as well as Syrian lamb burgers, and fig and fennel bread.

The Community Table offers a chart groups recipes by dietary restriction (meat, pareve, dairy), as well as sample holiday menus. So if you are looking for a new spin on some timeless Jewish recipes for your Passover table, you can check out its pages. We’ve offered two recipes here. In addition to the Brussels sprouts, you can serve braised veal stew with butternut squash for a change of pace.

This tantalizing dish was inspired by a fried version that we love but try to resist because of the amount of oil required. In our easier and lighter recipe, the sprouts are roasted and drizzled with a citrus glaze that contains pomegranate molasses—a widely available syrup that is Turkish in origin. The acidity of the glaze is a perfect counterpart to the crispy, caramelized sprouts.

Reserve any whole leaves that fall off the sprouts as you prepare them and toss them in with the quarters before roasting. The leaves will crisp up beautifully. 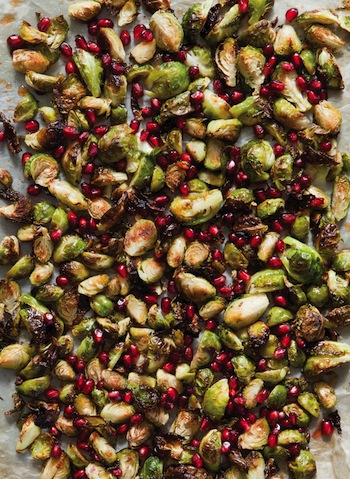 Meanwhile, make the glaze. In a small bowl, combine the orange and lemon juices, the pomegranate molasses, thyme, and chili pepper to taste.

Transfer the cooked Brussels sprouts to a large bowl. Drizzle with the glaze a little bit at a time just to coat. Toss with the pomegranate seeds. Season with salt and pepper, taste, and add more glaze if you think it’s needed. Serve immediately.

At least three things make this stew a winner for Passover: 1) you cook it on your stove-top so it doesn’t take up extra room in your over-crowded oven; 2) it doubles or multiplies even further easily; 3) you can make at a day or two in advance. And, it’s delicious. Inspired by Joyce Goldstein’s recipe from the Venetian Jewish community, this delicious stew, has been pleasing hungry diners for centuries.

In a large Dutch oven or heavy-bottomed pan with a tight lid, heat 1 tablespoon of?the olive oil over medium-high heat. Add?the squash and carrots and cook, stirring occasionally, until the squash starts to brown, 8 to 10 minutes. Transfer the mixture to a plate and set aside.

In the same pan, warm 2 tablespoons of the olive oil over low heat. Add the onions, garlic, and rosemary and sauté until tender and translucent, about 8 minutes. Transfer the mixture to a plate and set aside.

Warm the remaining 1 tablespoon olive oil in the same pan over high heat. Pat the meat dry and, working in batches, add to the very hot pot and brown on all sides, about 5 minutes per side.

Sprinkle with salt, add the wine, and let it bubble up.

Add the squash, onions, and the stock to cover and bring to a boil. Cover, reduce the heat to low, and simmer gently until the meat is tender, 1 to 1 1?4 hours. If the stew begins to dry out, you can add additional stock. Adjust the seasoning with salt and pepper and serve.