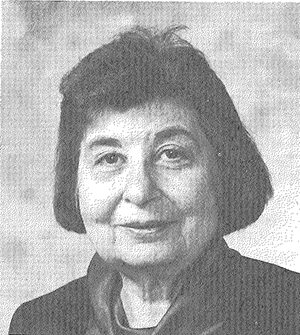 Bessie Pine, who worked for more than four decades at JCC Association helping Jewish professionals hoping to work at Jewish community centers find their niche, died on June 22. She was 96.

A native of Toronto, Canada, Pine touched many lives and made a tremendous difference not only in the JCC Movement, but also in the lives of many individuals seeking positions at JCCs around the country. She began her career as a volunteer club leader at what was then called the Jewish Community Centers Association of Toronto, and later became a branch director there.

Initially hired at JCC Association in 1951, when the organization was still known as the Jewish Welfare Board, she was the organization’s first consultant on older adult programming, and served as editor of Jewish Community Center Program Aids. She later focused on personnel issues, where she became known as a mentor and friend — a straight-talking, caring woman, who really knew how to make a match when it came to finding the right person for the job.

“She was very good at making the right shidduch (match),” says Ann Eisen, a former executive director of the New Orleans JCC who later was a community consultant for JCC Association. “And she was very encouraging to women. She was your cheerleader.”

Eisen met Pine at a JCCs of North America Professional Conference in the Catskills. Eisen was working in adult programming and came with her boss, Avrum Cohen, then the executive director of the JCC. At the time, JCC Association ran a large job fair, where JCC employee wannabees queued up for interviews with those who had jobs.

“They called it a ‘meet’ market, and it was,” says Eisen. “It was incredible, and Bessie ran it.”

Cohen was looking to fill a few open positions, but his wife became ill and he was called home. Eisen, an unseasoned employee when it came to hiring, was left with the task of filling the jobs — and with no clue what to do.

“I went to Bessie,” who gave her a room to interview in, made the appointments and basically steered the right people to Eisen.

“She absolutely gave me an unfair advantage and from that moment on she was my savior and friend,” Eisen says.

From the other side of the desk — that of the prospective employee — Pine is equally extolled.

“After she sent me on my first interview, I called her to tell her that I wasn’t sure I liked the agency,” recalls Arnie Preminger, president and CEO of Sunrise Association. “So she told me to come back and see her again, and rather than try and persuade me to take the job, she listened to how I felt.”

Pine got Preminger an eleventh-hour interview at the Kings Bay YM-YWHA. That job, he says, sent him on his way. And when he later received the Bessie Pine Award for Excellence in Mentoring from the Association of Jewish Center Professionals (AJCP), he couldn’t have been prouder.

“It still hangs in my office,” he says.

And she wasn’t above a little micro-management — or sound advice, as the case may be.

“I sat down in her office and the first thing she told me — and I’ll never forget it — was Bessie telling me that when I come to see her and anyone about a job interview, that I put on a jacket and a tie,” says Barak Hermann, president of the JCC of Greater Baltimore, who was wearing slacks and a shirt. “She taught me the power of making a good first impression.

“The next day I was at Today’s Man, buying my first blue interview suit.”

Before retiring in 1993, Pine received the first AJCP Tikkun Olam Award, and had already received its Professional of the Year award. Following her retirement she received the Florence G. Heller Award at the 1994 JCCs of North America Biennial. She had real yichus, or a Jewish lineage, proudly descended from the late Kabbalistic Rabbi Yedul Yehuda Rosenberg.

Pine was no pushover. She was blunt and as Eisen notes, “a kick, who would say anything and really let you know how it was.”

She was also persuasive, convincing Artie Allen, who had never been out of Alabama to come to the job fair in the Catskills.

“She was always there for me and helped me lay the foundation for my career,” says Artie Allen, CEO of the Aaron Family JCC in Dallas.

“This was also one tough lady,” he says. “She would let you know exactly how she felt. Not matter what the interaction, you knew it came from a person with an amazing heart, someone with incredible wisdom, someone who really cared.”

To honor Bessie Pine’s memory, a fund has been started at JCC Association. For more information or to make a donation please contact Arlene Swartz.