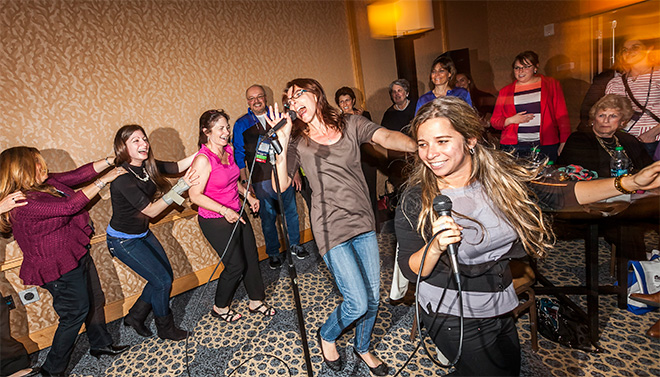 Beginning on March 28 and running through April 1, the JCCs of North America Biennial convention attracted nearly 700 people from around the globe, including budding leaders in our Esther Leah Ritz Emerging JCC Leaders track, U.S. military chaplains present for the JWB Jewish Chaplains Conference, and the lay leaders and professionals who make our JCCs tick.

We began by prepping for Shabbat, which included making challah for a conference-wide Shabbat dinner. We spent the day of rest considering the ways JCCs can make Shabbat come alive for its members, wrestling all the while with the question of whether or not JCCs should be open “on Shabbat” or “for Shabbat.”

Sunday began three intensive days of learning, networking and creating connections for the kinds of collaborations that make each of our JCCs stronger as part of a continental movement. From the exciting buzz that J-Talks, our new short-format plenary, generated; to the various plenaries featuring such speakers as Ron Wolfson, author of “Relational Judaism,” discussing the ways we can better involve a new generation of Jews; to Harley Pasternak, trainer and nutritionist to the stars, offering tips for wellness, Biennial offered a broad array of what makes JCCs such powerful agents for Jewish engagement.

Biennial is a great time to celebrate those who have made outstanding contributions to the
JCC Movement. JCC Association salutes those who have had exemplary careers, pushed their field in new directions and above all, inspired us all to strive for the best.