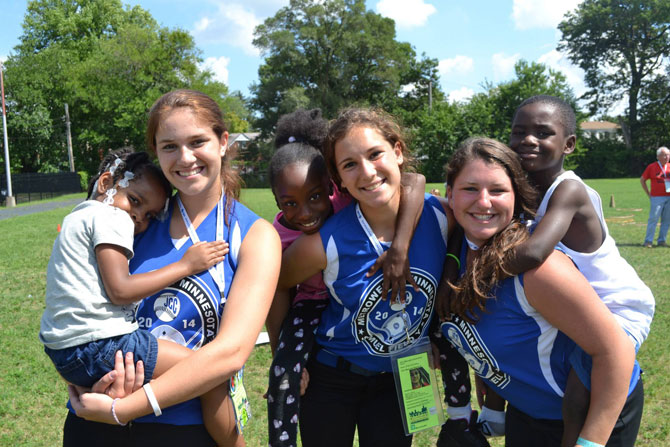 Built into each host community’s running of the JCC Maccabi programs is JCC Cares — formerly, Days of Caring and Sharing — in which Games participants engage in social action projects that reach out to the community.

And what each of 2014’s hosts — Adolph & Rose Levis JCC in Boca Raton, Florida, Betty & Milton Katz JCC in Cherry Hill, N.J. and JCC of Metropolitan Detroit — found was that when it comes to compassion, kids want theirs to be hands-on. Whether teens heard personal experiences of Shoah survivors, packed food or toiletries for area food banks or shelters, the experience is that much more meaningful when the kids know whom they are helping, organizers say.

“They wanted the kids to have one-on-one types of experiences,” says Brian Adler, Katz JCC’s development director, of his JCC Cares committee. “It wasn’t just writing letters to veterans of foreign wars, and Israeli soldiers overseas, he notes. They heard from someone who was active in the service, and Jewish, and from someone who served in World War II, and what it was like to be Jewish in the military.”

As well, when participants packed three-quarters of a ton of food for the local food pantry, they heard from someone who had been a recipient. “If they aren’t touched by what they are doing, they’re missing an important piece,” says Adler.

We’re concerned not only with what we do to build community with in the JCC, but also with how the JCC connects to the larger community.

As at Levis JCC, teens at Katz heard from Holocaust survivors from Café Europa, a program for elderly survivors. They did beach clean up, planted a community garden, packed toiletries for the homeless and volunteered at an assisted living center for seniors. The largest project was a carnival at the Hillel for children with special needs.

“For the most part we had really good feedback,” says Nancy Carroll, Games director. “We spent a lot of time with our own kids who had been to the Games before and asked what they liked and disliked. They wanted hands-on. They liked working with kids and with seniors.”

JCC Cares has been an integral piece of the Games experience for more than a decade, providing a way to integrate Jewish values during the Games, according to Dr. David Ackerman, director of The Jack, Joseph and Morton Mandel Center for Jewish Education. Funded initially with grants from Coca-Cola and Legacy Heritage Fund, what was then called “Days of Caring and Sharing,” focuses on social action and tikkun olam, or repairing the world. Some JCCs, like the Evelyn Rubenstein JCC in Houston, have found ways of integrating JCC Cares into the JCC’s ongoing programming once the Games are over.

As Ackerman explains, JCC Cares models “the two ways we understand building community. We’re concerned not only with what we do to build community with in the JCC, but also with how the JCC connects to the larger community.

“The idea is that even in the midst of celebrating our athletic ability and efforts, we remain mindful that there are others less fortunate.”

Organizers of JCC Cares in Detroit found the hands-on approach definitely worked for ArtsFest participants. Teens participating in the intensive week of arts exploration worked with special needs children and adults at Birmingham, Michigan’s Far Conservatory, and on a project called Bottomless Toy Chest, putting together toy packages for kids with cancer, and put together meal packages for a program called Kids Against Hunger.

But one of the projects that really hit the mark, provided teens with a glimpse of the past, while working toward a better future. Organizers had taken the teens to the Northwest Activity Center near downtown Detroit, to work with young children at that community center. Teens did a full day of projects, bringing in school supplies they had collected and creating a mobile library. Each child in the program received a backpack full of supplies and got to participate in a field day run by Games and ArtsFest participants.

And the history lesson?

“The Northwest Activity Center was our first JCC, before we moved to the suburbs,” says Ariella Monson, Games director for Detroit. “We wanted to show these visiting kids what our our old JCC looks like, and that this impacted that community.

“People think they are going to JCC Maccabi because it’s a sports tournament, or an arts experience. But it’s also about giving back to the local community you are visiting.”