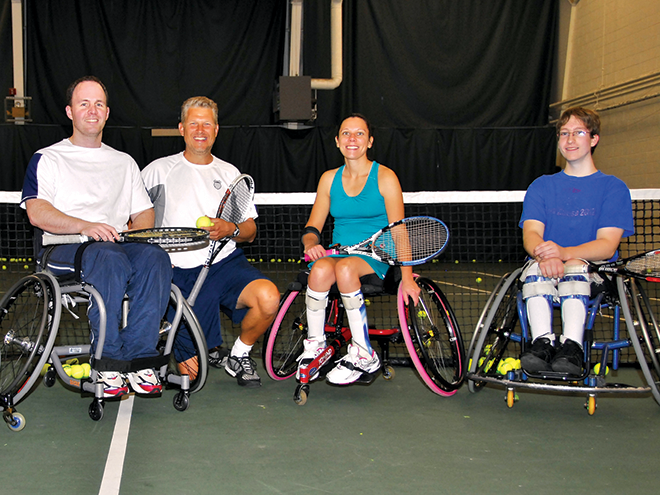 Tennis for everyone at JCC Indianapolis

In high school, Lucas Strohmenger liked to skateboard and snowboard. All winter long, the Syracuse, New York native could be found on the slopes. A car accident when he was 18 put an end to that. Or so he thought. He moved to Indianapolis to start fresh, and it wasn’t until after he’d been wheelchair-bound for 10 years that he went wheelchair skiing in Colorado with his dad.

“I really liked it, and decided to look for programs in Indiana, but there aren’t too many for skiing,” he said. Instead, his quest to be more active led him to JCC Indianapolis, where he began playing tennis.

“The nice thing about wheelchair tennis is that it’s a very inclusive sport,” says Strohmenger, who practices at the JCC and is ranked fifth nationally by USTA Men’s Wheelchair B Singles division.

“As a wheelchair player you can play against able-bodied players as well; they give you two bounces, that’s the only rule difference.”

At JCC practices, there are anywhere from three to seven players learning their strokes. When Strohmenger began, he had been disabled long enough that he understood his mobility and how to move. Meshing that with tennis strokes was something he enjoyed learning, as he added topspin and perfected his serve. “That was difficult to learn, but it was kind of like what an able bodied person would find difficult if they were learning tennis for the first time,” but the JCC, he says has been a great place for doing so. “Everybody there is very accommodating. It’s a very friendly place.”

And that’s just what Kim Shippy, racquet sport program director at the JCC, wants to hear. Shippy, who grew up thinking tennis was an out-of-reach, “ivory tower” activity, bubbles with enthusiasm for the tennis program as she describes all the ways the program aims to include those who want to participate.

“How does tennis, which at least used to be seen as a very elitist sport, adapt to be inclusive?” she asks, noting that the JCC has sought to bring the program to every demographic that uses the J. “We have a program for three- to four-year-olds; high schoolers, adults who have never played before; 90 year-olds, and wheelchair leagues. There’s a lot of diversity.”

For Shippy—a U.S. Certified Tennis Professional and a USTA (United States Tennis Association) player who has competed strongly enough to make nationals—tennis seemed a remote, rich-kid thing when she was growing up. And although she liked sports and competed in many, tennis always seemed too expensive. It wasn’t until she was out of college that she picked up a racquet and learned the sport.

The JCC has also sought to be inclusive in other ways, offering financial assistance to those who cannot afford the cost of the program, which runs as little as $66 for eight lessons for the youngest players and as much as $400 for 16 lessons for adults (costs are less for those with JCC membership). There are more than 400 players taking part at every level from absolute beginner to those who are at the top of their age group at the state level, says Shippy. 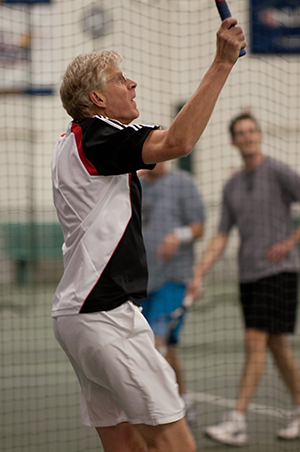 Even the seniors vary, she notes, from those who are still in excellent shape and who played in college, to those who have never picked up a racquet before, but thought they’d try something new. Some adults come to the program from one of the JCC’s nutritional or weight-loss programs, and they find a place, too, she says. And the JCC’s early childhood program also gets into the act—or rather, onto the court—as it works on ways to reduce childhood obesity.

“What I admire about this program is that it’s so much more than the skill set and lifelong sport of tennis,” says Dori Denelle, JCC Association vice president, emerging leaders and governance, who serves as a consultant to JCC Indianapolis. “The staff understands how it fits into the mission of the JCC. They involve people with disabilities, there are intergenerational components, they provide adjusted fees if needed, and they are all about involving families to adopt a healthy, active lifestyle.

“It couldn’t be more mission driven!”

Sonja Clark’s 10-year-old daughter, Vivian, loves the program, which was revamped five years ago when Jason Suscha was brought in as the racquet sports director. Her two boys had played before his arrival, but did not improve as much as players, she says.

“Vivian has learned so much and she has grown so much,” says Clark, whose family participates in a variety of other JCC programs, as well. “They are very
positive and make it fun.”

What she really likes is the way the JCC “makes you feel like you are on a team, and that you are not just playing for yourself. You are there to support each other. Tennis is such an individual sport and when you watch a match, you feel you are all alone against everyone else. But when you are on this team, you are all together. They support each other, watch the other kids and they do a cheer at the end.”

Knowing she has helped foster that kind of spirit takes Shippy far away from the days when tennis seemed like something that was beyond her means.

“The JCC is a place where, no matter what you are doing here, tennis or something else, it just enriches your life,” she says. “That’s its purpose: to be inclusive and to enrich life, whether it’s your health or your mind, or anything else.”

How is your JCC inclusive? Let us know, and share your stories with us.
Email Circle Editor Marla Cohen.