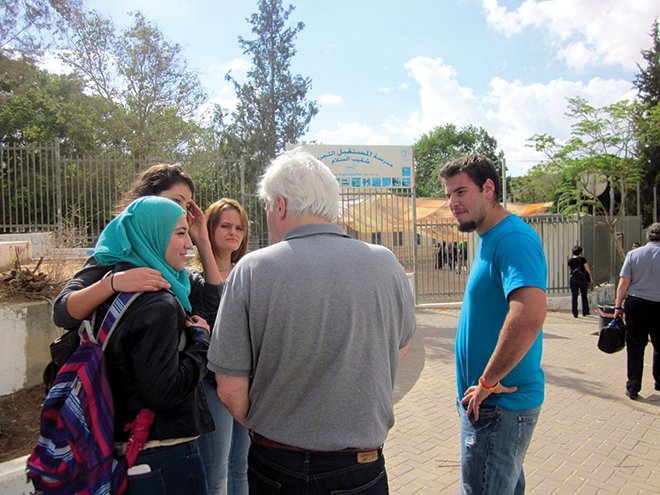 A trip to Israel is always a powerful and moving experience, eliciting emotions of awe and amazement at the depth and breadth of civilization and of course, the Jewish people’s triumph over the tragedy of the Holocaust to become, as we say in Hatikvah, “a free people in our own land. Eretz, Zion, and Jerusalem.” But the recent JCCs of North America Solidarity Mission I attended, along with 15 JCC lay and professional leaders from around the country, was different. What made it so was the uniqueness of the JCC mission: to convene, connect, and build Jewish community. It is through this lens that Israel truly comes to life as a nation, small yet incomparably rich in the ways it approaches and realizes the very nature of community and caring. The goal of paying attention and not letting anyone fall through the cracks has always been central to Jewish life, and nowhere have I seen examples of community in action better than on this trip.

We began our tour with a meeting of the Israel Association of Community Centers management to learn about the myriad of services community centers in Israel provided during a time of crisis. Then we headed down south to visit Kibbutz Nahal Oz and Sderot, areas hit by thousands of rockets over recent years. There we spoke with community residents, many of whom are Jewish refugees from Arab lands who could not afford to leave during this summer’s conflict for safer cities. And although it was difficult to watch nine- and ten-year-olds simulating a rocket drill with only 15 seconds to get to a shelter, this was as expected.

During the next leg of our journey I saw ordinary people doing truly extraordinary things—at a residential facility for children with severe physical and cognitive disabilities, a leadership institute for both Arab Israeli and Jewish Israeli teens, and at the One Family Center, where we met the mother of one of the Israeli boys kidnapped and killed this summer.

This solidarity trip… made me feel that the JCC Movement is indeed a movement, alive and well.

This last program left our group speechless. We heard how this center helps victims of terror move on with their lives after such horrific (and in this case, recent and public) loss. We were also informed at the very same time of yet another terror attack in Jerusalem.

There were lighter aspects of the trip—a sumptuous dinner at a boutique winery on a moshav; an improvisation and comedy session, “How to Relieve Stress with Humor;” and a meeting with a lacrosse team, which, among other things, encourages girls to play sports and defy stereotypes. And outweighing every difficulty were amazing stories of success. Sderot, the town hardest hit by rockets, becomes a rock music mecca; agriculture thrives; Israeli innovation excels; Nobel laureates dazzle; and scientific and medical advances make our world a better place.

So, what does a JCC Movement trip like this say to me as a veteran professional working in the Jewish community?

It says that the work we do matters, and that we have much to learn from the institutions Israel has built to meet human needs. One could surmise that the immediacy of external threats has made these institutions resilient. But I would argue it is the sustainability of the Jewish spirit. As it says in the Talmud: “If a person resides in a town for 30 days, this person is responsible for a soup kitchen; after three months, the charity box, after six months, the clothing fund, after 12 months, repair the town walls.” This is the tradition that teaches us, generation to generation, the value of individual and communal responsibility.

My Jewish journey began at 16 on a summer trip to Israel. I didn’t understand the politics, but upon visiting a kibbutz, I intuitively knew that I was part of a larger picture. I understood that the oranges I picked one morning before the sun rose went to benefit someone else. I climbed Masada at the crack of dawn, and visited the Western Wall and felt connected to the longest surviving peoplehood whose prayers call for peace, remembrance, and renewal. I entered the world of Jewish communal service to deepen my connection and to help others connect to the Jewish people.

This solidarity trip reminded me of my early motivations, giving me a renewed sense of purpose. It made me feel that the JCC Movement is indeed a movement, alive and well—a welcome tent to building Jewish identity in a way other institutions cannot, by making community and caring our ultimate value and brilliant expression of Jewish life past and present.

Life is complicated in Israel and there are no easy answers to the current political situation. The reality, as we learned from former Associated Press journalist Matti Friedman, is that Israel is the tiniest, most stable country, in a sea of upheaval and extremism that have little to do with its existence. Although the media gives the impression that the Israel story is the Middle East story, this is far from the truth. To combat these distortions is a battle as old as anti-Semitism itself, requiring one to question commonly made assumptions about truth and journalism. Yet in the face of daunting uphill battles in the media and military, what is clear is that it is indeed community that becomes the single most tangible tool for empowering people.

This trip gave me the privilege of meeting Israelis across the political spectrum who share a commitment to service. From educators to social workers to filmmakers; to fledgling organizations such as Kinetis that provides a “people to people” connection for bloggers and other opinion makers; to the Reut Institute with its “Israel 15” vision, seeking to make Israel one of the top 15 nations with the best quality of life; to the genius of the Israel Aerospace Industries; and to Israeli Arabs and Jews willing to work together to solve problems; I am inspired by their innovation, determination and success.

I return to my 92Y community with a heightened desire to make each moment count, to continue to learn from the earnest examples of people paving new paths, and with renewed confidence in the power of our community to make a difference.

Susan Engel is director of lectures at 92Y in New York City.