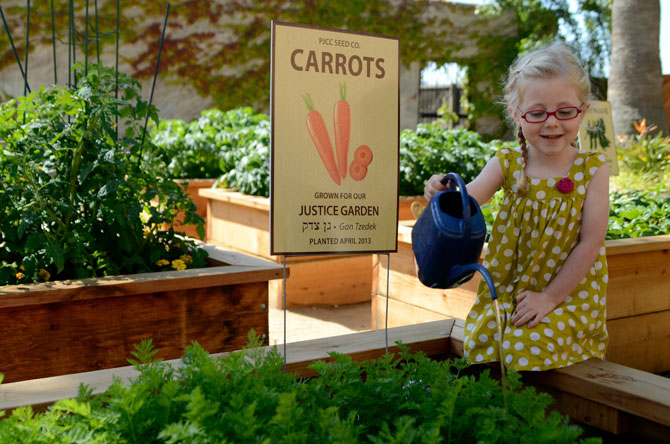 PJCC preschooler (who has since moved on to kindergarten) Molly Rosenberg in the Justice Garden. Photo credit: Sharon Giordano.

Cooking has always been one of Wendy L’s favorite hobbies. But when the already exorbitant rent on her Silicon Valley one-bedroom apartment increased by a 50 percent, preparing family meals became a distant luxury. Instead, the struggling single mother of three found her young family in the most unimaginable of circumstances: They were homeless.

Across town in nearby Foster City, Calif., an excited 4-year old preschooler was dragging her visiting grandmother by the hand to a flourishing community garden at the Peninsula Jewish Community Center (PJCC). “Look!” Lulu exclaimed, beaming with pride as she pointed to a produce bed. “I planted potatoes for a family who doesn’t have a home.”

Lulu may not have known it, but she planted those potatoes for Wendy, as well as for the 1,000 homeless adults and families in San Mateo County who use InnVision Shelter Network as their residence. The purpose of the PJCC’s Justice Garden (Gan Tzedek in Hebrew) is to invite community outreach and involvement, and to raise awareness of the need for social action. Since the garden’s first planting in April 2013, the PJCC has delivered almost 700 pounds of organic produce, including spinach, lettuce, chard, carrots, tomatoes, squash, herbs, and more. The thriving garden is complemented by a stunning community mural that incorporates themes of social justice and spans the width of the once-barren quarter-acre courtyard.

Look! I planted potatoes for a family who doesn’t have a home.

The Justice Garden is one such effort. Eleven raised garden beds overflowing with green beans, potatoes, eggplant, and more, provide a living foundation for year-round programming with a curriculum targeting PJCC preschoolers, campers, and Treehouse (afterschool) participants. In addition, the garden serves as an interactive classroom; monthly garden service days for young families combine digging in the dirt with learning sessions taught by Stephanie Levin, PJCC director of programs. 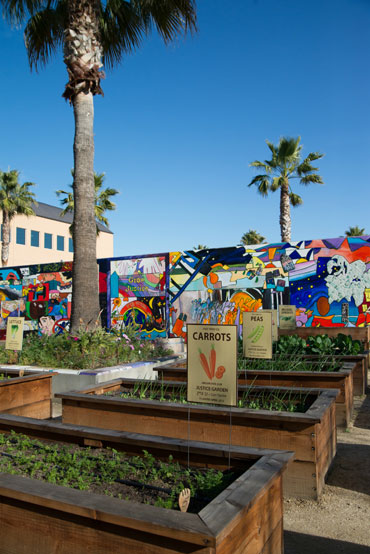 “People tend to think of San Mateo County as an affluent region, especially since we’re adjacent to Silicon Valley,” Levin says, referring to the prosperous high-tech hub to the south. “But the truth is that hunger knows no borders or boundaries.” According to Second Harvest Food Bank, one in four individuals in San Mateo County, is at risk for hunger, compared to the national average of one in six. “We may not be able to feed the nation,” Levin adds, “but we can do something to help our neighbors.”

Each 30-minute learning session is followed with hands-on planting, plucking, and pruning under the guidance of the PJCC’s garden manager. At harvest time, volunteers deliver the donated fresh produce to InnVision Shelter Network, which serves 18 sites throughout San Mateo and Santa Clara Counties.

Levin says that Grow Justice: Fight Hunger has sparked conversations that range from Torah and tomatoes to Tikkun Olam and empathy. “It’s easy to clean out your kitchen cabinets, donate food you aren’t planning to use, and feel like you’re doing a mitzvah. And you are,” she emphasizes. “Don’t get me wrong. The difference is that this is not food we’re no longer interested in eating. We’re growing fresh food specifically for these families. We hope it makes them feel cared for and valued.”

Grow Justice: Fight Hunger also serves as a centerpiece for social justice, Jewish learning, and training Jewish leaders of tomorrow. To this end, the PJCC has partnered with Kevah, a Berkeley, Calif. non-profit organization that engages Jewish identity and builds community through the study of classical Jewish texts. Under the guidance of a Jewish educator leading the Grow Justice learning, small groups commit to meet for four sessions to study Jewish concepts about food, raising kind and compassionate children, and exploring the Jewish calendar.

“When I was invited to participate, I truly felt as if someone had tapped into my needs,” says Kevah member, Julie Wheeler. “We look forward to any opportunity we have to give back, and achieve this through the Justice Garden.” Wheeler, her husband Loren, and their son and daughter, ages 10 and 5 respectively, are part of a 15-member Kevah group of four families that meets each month at the PJCC.

Wheeler appreciates the opportunity the study group provides to look at Judaism from the past, present, and future. They also address the important role that food, food beliefs, and traditions play in her family’s “Jewishness,” adding that their group consists of interfaith families and their children.

“Having a platform to discuss, disagree, and learn about different beliefs has been an incredible life lesson for all of us,” she says. “We leave every meeting with some nugget of wisdom. It’s been an amazing gift and I’ve loved the journey.”

Deborah Pinsky stands before the mural and observes the flurry of activity taking place in the Grow Justice Garden. Its harvest day, and volunteers are gathering crates brimming with Swiss chard, spinach and romaine lettuce to deliver to InnVision Shelter. On the next garden service day, volunteers will prepare for the fall harvest. Some seedlings will blossom in the garden’s greenhouse until volunteers transplant the burgeoning produce outdoors to flourish under the warm California sun.

“The end result has been a transformed community steeped in social justice,” Pinsky says. “Giving back and making a very real difference in the world.”