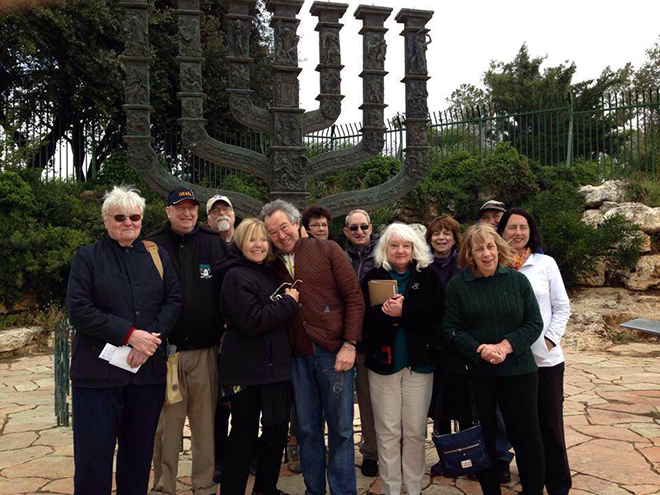 In April, we embarked on a one-of-a-kind journey, a tour-seminar-exploration of the arts scene in Israel. We focused on a theme: change. How has the arts scene in Palestine/Israel in the last 100 or so years since the founding of the Bezalel School of Art in 1906? And . . . how has Israel itself changed over that same period, and how have Israeli artists reflected that change?

I planned this unique JCC/Tapestry Art Tour of Israel, one of JCC Israel Center’s Boarding Pass trips, for participants at the Harry & Rose Samson Family Jewish Community Center of Milwaukee with the help of Shira Lupiansky Hasson and the staff of the JCC Israel Center in Jerusalem. With their guidance we were able to explore these questions and see how Israel’s art scene has grown and developed with time.

In April, we met every sort of Israeli artist and saw,heard and watched every kind of work of art — everything from the most traditional to the most radical. We met at the current Bezalel facility on Mount Scopus, and examined the plans for the new Bezalel building in downtown Jerusalem. We met with author Meir Shalev who hosted us at Moshav Nahalal – the location of much of his writing. We had a private concert by musician Yair Dalal, who is at the forefront of the musical movement fusing Eastern and Western music. We visited a studio that trains at-risk women in the art of clothing design.

We had insider tours of both the Tel Aviv Museum of Art and the Israel Museum. We made our own art during a watercolor and drawing lesson at the Jordan Valley College. We shared a Shabbat dinner with Lone Soldiers, those soldiers in Israel whose families live abroad at the Lone Soldier Center in Memory of Michael Levin. We viewed astonishing student films at the Ma’aleh School of Television, Film & the Arts. We toured a groundbreaking Arab art gallery in the town of Um Al Fahem and spoke with its visionary creator and director. We ate chef-created meals. And on and on . . .

More than 100 years ago, the renowned Jewish sculptor, Boris Schatz, created the Bezalel School of Art in Jerusalem. He ran the school with an iron fist – directing what could and couldn’t be considered “Hebrew art.” And there were rules: “Hebrew” art must have flora and fauna of the land of Israel. It must include Hebrew calligraphy. It must reflect the Jewish experience. It could reflect historical or Biblical scenes. He avoided calling it “Jewish,” but, in his opinion, local art must be the work of Hebrew artists in their own land and reflect its culture and values. There were those who rejected his vision and moved to Tel Aviv, or even Europe to pursue their own vision as artists. The Jewish artists of Palestine, however, looked inward at each other. They had no access to the great art of Europe or America except through black and white photos in the newspapers.

Today, there is a thriving arts scene in Israel — every type of artist, every medium, every style. Israeli artists today, however, don’t necessarily look inward at each other. They travel. They innovate. They are aware of international trends. Even the Bezalel School of Art, which still exists, has lightened its required prerequisites for inclusion into the realm of “appropriate” art. Israeli artists consider themselves world artists, not really Israeli artists. They look outward, not inward.

The arts in Israel today are certainly alive.

For more information about how your JCC can tailor-make a Boarding Pass trip to Israel or Europe around a special interest or theme, contact Leah Garber director of the JCC Israel Center.

Jody Hirsh is the director of Judaic education at the Harry & Rose Samson Family Jewish Community Center of Milwaukee.