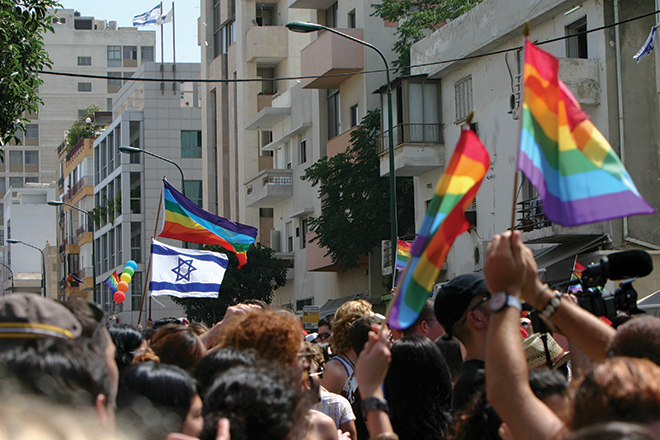 In his work as the national manager of education and training at Keshet, Daniel Bahner has assisted JCCs in finding ways to be more inclusive for the lesbian, gay, bisexual and transgender (LGBT) communities. So this year, he was pleased to be able to lead sessions for the first time at JCCs of North America Professional Conference in March, where he led two sessions and facilitated an informal late-evening gathering.

“It was definitely great to be there to help start that,” he says of the sessions, where they discussed shared language on what these identities mean, assumptions people make, and steps JCCs can take to let these communities know they are welcome.

Keshet is a national grassroots organization working for full equality and inclusion of LGBT Jews in Jewish life. And working with JCCs just makes sense, Bahner says, because of the potential impact they can have.

“JCCs have the potential to touch so many areas of peoples lives from cradle to grave,” he says. “You have young children, adult programs, older adults. There is such a wide range of impact and you can engage people in many places with an inclusive message and environment.”

Keshet is not alone in seeing JCCs as a way to spread a message of inclusion. Also at Professional Conference for the first time was Matan, a 15-year-old organization that seeks to enable the Jewish community to be more inclusive of children with special needs and their families through partnerships, professional development and mentorships, as well as through providing some direct services.

“JCCs are in a really unique position—they are inclusive by design,” says Meredith Polsky, Matan’s director of training and advocacy, and one of the organization’s founders. “This [being at Professional Conference] was a really exciting opportunity for us. JCC Association was able to put inclusion on the table in a meaningful way.”

Working with groups like Matan and Keshet helps them become more open, inclusive and welcoming

JCCs are the largest platform of early childhood education in North America. To create inclusive learning environments through them assists Matan in its own goals of changing education for those with disabilities. It also assists JCCs in fulfilling their missions as places open to all. “The conference really highlighted that this is something JCC professionals are looking for,” says Polsky.

Seeking out arrangements with such organizations and finding ways to bring their messages into JCCs is a move in synch with the very sensibility of JCCs, according to Arnie Sohinki, JCC Association’s senior vice president of program services.

“We talk about JCCs being open and welcoming, that is fundamental to their mission,” says Sohinki. “Working with groups like Matan and Keshet helps them become more open, inclusive and welcoming, as well as a safer environment, for these populations.”

Both groups held sessions meant to appeal across job tracks, to include as wide a range of age groups as a JCC might encompass. Keshet ran one session aimed at those who work in adult programming, as well as one that spoke to general issues of LGBT inclusion and a second that offered a more nuts-and-bolts approach. Matan held sessions aimed at those who work with teens, in areas of early childhood programming and education and participated in a more general session on overall inclusion of those with disabilities. Keshet has already arranged for further education to JCCs through a series of JCC Association webinars; and JCC Association is working with Matan to bring in more support and guidance in the area of inclusion for young children.

Veronica Maravankin, vice president of early childhood at the Mandel JCC in Palm Beach, found the Matan sessions helpful to her, as the JCC pushes its two programs—one in Palm Beach Gardens and the other in Boynton Beach—serving approximately 350 children, to be more inclusive. Currently some of the children need early intervention including speech, language and occupational therapies. To become more inclusive requires meeting certain standards, hiring the right sorts of professionals such as specialized therapists and increasing the hours of the school psychologist.

“One of my goals is to begin hiring early childhood educators with backgrounds in special needs,” says Maravankin. “That was one of Matan’s recommendations, to have this embedded in the classroom.”

That concrete advice born of experience extends to JCCs and camps working with LGBT issues. Many of the issues that arise these days have less to do with overt intolerance and more to do with raising awareness of issues that might arise and then addressing them.

“If you value LGBT inclusion, don’t keep it to yourself,” says Catherine Bell, Keshet’s national program director. “There’s this idea that your leadership and staff are cool with it, their best friend is gay, but no one talks about it. Make it a statement on your website that your JCC is committed to being fully inclusive.”

Keshet hopes to guide JCCs on this journey through ongoing webinars, and recently held a first one on transgender inclusion in locker rooms. Several more are planned that will aid JCC staff be more welcoming to transgender and non-conforming audiences, she says.

Miriam Shwartz, co-director of JCC Ranch Camp of the Robert E. Loup JCC in Denver, Colorado has participated in a training Keshet did in the Boulder area. The goal was to be proactive and train the staff with the idea of being better prepared should the issues surrounding LGBT inclusion arise.

“We haven’t had a chance to tackle anything so big as of yet,” she says of coping with campers or counselors who are public about their gender identity and sexual orientation. “But certainly we want to be progressive and plan ahead…That’s very much on my mind. How do we make sure everyone feels comfortable in that space?”

Visit Israel with the LGBTQ Community!

This interfaith trip is custom-designed for members and friends of the LGBTQ communities from around North America. Celebrate Gay Pride in Tel Aviv as part of an itinerary packed with opportunities for engagement and connection, exploration and history, community, fun and so much more!