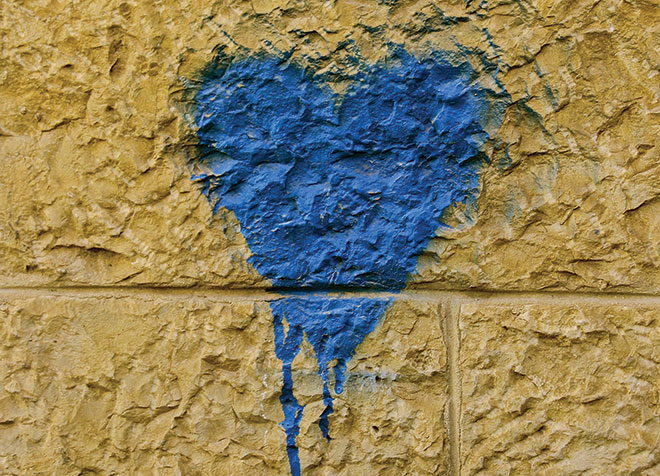 Twenty years ago I sat in a rec room on the campus of the World Union of Jewish Students (WUJS) in Arad, Israel having just begun a six-month artists-in-residence program. A little beer, some olives and baigele, music and conversation with fascinating new friends from around the world — it was a perfect Saturday night.

A news report from Tel Aviv flashes onto the television screen in the corner, and one of the Israelis in the group begins switching back and forth frantically from CNN to Israel’s Channel Two. Flashing lights. Crowds of people pushing, yelling, some collapsed on the sidewalk and street. A reporter begins a sentence: Prime Minister Yitzchak Rabin has been shot. Then he looks to the ground. Shouts and gasps. A staff member rushes through the door, breathless, and puts his hand on the shoulder of a young woman weeping in her chair. We wait, many of us wondering if we are missing out on some insane Israeli practical joke, a rite of passage of black humor in the toughest neighborhood in the world. Cut to another reporter, and he is crestfallen, shocked, a chain of words emerging link by link from his mouth: Prime Minister Yitzchak Rabin is dead.

The same night, the next night, I don’t remember — we organized a bus to Jerusalem. We were up all night and all of the next day waiting to see Rabin’s casket at the Knesset. A million people came to say good-bye. That’s more than 50 million people in U.S. terms, a sixth of the country.

One month later I travelled back to Jerusalem on an Egged bus, stood in the first of many long lines at the Ministry of the Interior, a stack of papers in my hand, and wove my way from office to office over days: I made aliyah. I became an Israeli. Damned if I would let this evil define this place. Damned if I wouldn’t step up to do my part to make sure that the good — whatever that is — would prevail.

Becoming an Israeli had been on my mind for a while. How could I not have fallen in love with this maddening place even after a year? I still love Israel, but she has put me through the ringer often, now more than ever. And Jerusalem? Oh Jerusalem — is there anywhere like it? How can I describe loving Jerusalem — trickster and companion, foil and muse, navel of family and music and food and conflict? Stones and trees. My makhholet (corner store) and butcher and bakery and teachers. My books and friends and the parks where the children play. Sirens and helicopters and barricades and shouts in the night. The place where the messiah never comes — and who would want the messiah to come anyways after all of that?

So now, especially now, when Jerusalem seethes and shudders with violence, we are going to Jerusalem to seek innovation, friendship and hope. Twenty-four JCCs represented by board members, senior management and “rising stars” are going to Jerusalem because we know that the work of Jerusalem’s creation and creativity is never done — and if we can learn from it, we can take some of it home and keep it alive for all of us.

In fact, over the next two months, the JCC Israel Center is slated to host 11 groups in trips spanning the country. As of the publishing of this piece, not one of them has canceled a visit. We go to Israel because we know there is nowhere like it — a miraculous and wildly challenging place that carries within it the very soul of a people and the hopes and dreams of many others as well.