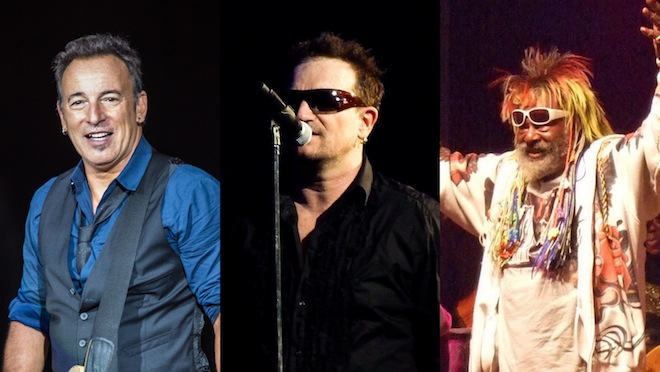 Listen to that. We’re starting to hear some music out there.

Before I try my hand at performing a little interpretive magic on the songs you have chosen to describe what the JCC Movement needs and wants to be, let’s ask a question: Why build a playlist to get to know what’s driving communities across North America? Why choose the pathways of music to tell our tale?

I asked Bruce Springsteen this question once. It was just Bruce and me, just me and him; so I asked Bruce the question. Sort of. I said, “My friend Bruce, what’s a great band all about?” He just looked at me and smiled.

“What’s music all about?” I asked him (This was in 2005 at the induction ceremony for U2 at the Rock and Roll Hall of Fame and Museum). And he said:

A great rock band searches for the same kind of combustible force that fueled the expansion of the universe after the Big Bang. You want the earth to shake and spit fire. You want the sky to split apart and for God to pour out…

I liked that answer very much, but I wanted to know more. So I went to Bono, and I said, “Bono, what’s music all about? I mean, what’s it really about?” Bono just stared out at all of the rock stars and hangers-on and journalists and fans at the Rock Hall as the great Bob Marley was about to be honored:

New hymns to a dancing god, redemption songs — a sexy revolution, where Jah is Jehovah on the street level — not over his people, but with his people…dressed to hustle God: ‘Let my people go,’ an ancient plea — prayers catching fire…

Now don’t get the wrong idea. These are not answers about religion even if there is a lot of Godtalk in them. But they are answers about soul. So in the spirit of the musical son who sort of knows how to ask a question, I turned to George Clinton. “What is soul?” I asked. “Soul is you, baby,” he said. And I thought, “Yes, that’s what we’re talking about. Music is going to lead us to the soul of the JCC Movement. Those songs are going to tell us all about us.”

Hold on tight. Here we go.

And add your song here.