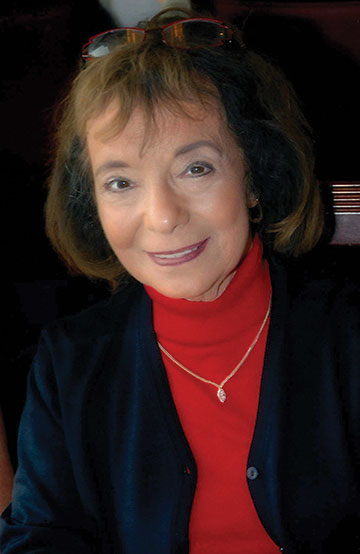 She won’t select a favorite book. And she’s mum about preferring one author over another. “I’ll never say that,” says Carolyn Starman Hessel, who has steered the Jewish Book Council (JBC) for 21 years and will be retiring in March. “So many of them are my friends. I say that my favorite book is the Torah.”

It’s a little bit shtick, but it comes from the heart. You can hardly imagine this diminutive, no-nonsense woman doing anything so un-politic as picking a favorite.

And how would she decide? There are just too many People of the Book from which to choose.

Over the past two decades Hessel has, as director, turned a moribund agency born to promote Jewish books into a powerhouse of the Jewish publishing world and an essential resource on the Jewish literary scene. The Jewish Book Network, a three-day conference with its Meet the Author program, is her creation, and allows authors to reach their audiences in a very direct way.

“Jews still buy books,” she says. “I believe the written word will always be there and we as Jews—who would we be without the written word?” The unsaid answer—not much—hangs in the air.

“She is such a story,” says Abigail Pogrebin, author of the popular “Stars of David.” “This tiny woman with these long nails and this huge hair. She packs a wallop, and woe to the person who underestimates Carolyn and her influence in the Jewish book world.”

Pogrebin cannot say enough good about Hessel, who helped push “Stars of David,” into best selling territory. She credits Hessel with recognizing that her book wasn’t just a bunch of interviews with celebrities about being Jewish, but also was about her own Jewish identity.

“Pivotal,” is the word Pogrebin uses to describe Hessel’s influence on her career, pushing her to attend book fairs at JCCs and synagogues well beyond the Hudson River.

“When you go to places like Phoenix and Las Vegas, you see Jewish continuity and community in different ways,” says Pogrebin, who has since made the rounds with “One and the Same,” a book about growing up as a twin. “It’s an education and it expands your understanding and what it means to sustain this culture and these voices.”

Those voices from the heartland also sing Hessel’s praises. Marilyn Hassid, assistant executive director at the Evelyn Rubenstein JCC in Houston, is succinct: “She saved us.”

The Jewish Book Council dates back to the 1920s, when the first Jewish book weeks began. These events, targeting Yiddish and Hebrew language books and held near Shavuot, eventually moved to the weeks before Hanukkah and morphed into Jewish Book Month.

For several years, the Council came under the auspices of the Jewish Welfare Board—which eventually became JCC Association—but in 1994, right before Hessel was hired, the council’s board of directors opted to make it an independent organization. Today the JBC recommends books for JCC Association’s JCC Reads, a program that supports and encourages book clubs through JCCs. And at the JCCs of North America Biennial, the council endorsed “The Submission,” by Amy Waldman, for a Shabbat author program.

Before Hessel came along, JCCs were informally creating ways to weed through authors at the American Booksellers Association conference. But sitting on the floor in hotel conference rooms trying to find the best in Jewish literature was getting old, says Hassid.

She and her colleagues approached Hessel. “We [the JCCs] had grown so big and strong in terms of our ability to book these authors and bring these books,” to an audience, Hassid explains. “But we needed the organization that Carolyn brought to us and the kavod [respect] and the ability to wheel and deal on our behalf.”

Out of this grew the Jewish Book Network Conference, with its Meet the Author component. This two-minute pitch in front of a room of discerning JCC culture vultures has been likened to “speed dating” or a tryout for “American Idol,” literary-style. And no one should come unprepared. Newbies have aced it and just as many famous authors have flopped.

Joseph Telushkin, author of two dozen books, including the 2006 National Jewish Book Award winner, “A Code of Jewish Ethics,” acknowledges that before Hessel, he can’t even recall participating in a book fair. The tours she coordinates for authors help raise their national profile and give them access to audiences “in a way that did not exist before,” he says.

On a personal level, Hessel has “been so integral to every part of my life,” says the man who dedicated his book about Hillel to Hessel. “She is literally the first person I turn to for advice on all matters literary and in having to do with my career.”

Hessel may be retiring, but she’s hardly ready to call it quits. She will continue to oversee the Sami Rohr Prize for Jewish Literature, which awards $100,000 to promising authors. First awarded in 2007, it is given in alternate years to works of fiction and non-fiction.

Hessel will also be a more active participant on the board of the directors of the JTA, the Jewish news wire service. “I believe in what they are doing, and their mission,” she says. “Again, it’s all about the written word.”