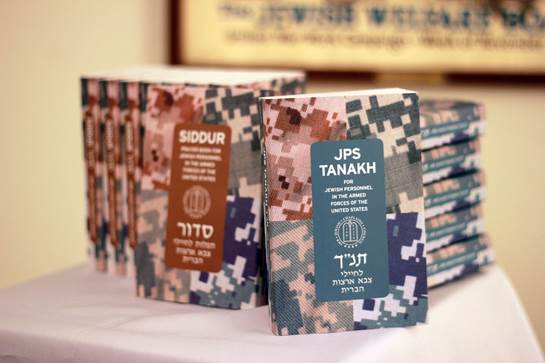 The Tanakh, which now has a camouflage cover to match the JWB siddur, recently arrived in JCC Association’s offices and are being dispatched to service men and women as they are requested. They are free to active-duty members of the United States armed services.

“We ran through 10,000 of them in six years and the demand is still there,” says Rabbi Abbi Sharofsky, deputy director for programming, JWB Jewish Chaplains Council. “People want them and use them and appreciate having them.”

We realized our scriptures filled the void for Jewish recruits.

The JWB has a long history of providing texts to Jewish military personnel. In World War II, the organization, which is a program of JCC Association, published a book that included readings from the Holy Scriptures Prepared for Use of Jewish Personal of the Army of the United States) originally published in 1917, according to Rabbi Harold Robinson, director, JWB Jewish Chaplains Council.

Those booklets were long out of print by the early 2000s, when JWB decided it should offer a Tanakh for Jewish service men and women. Recruits, who often spend long hours in remote places, were picking up copies of the Bible being distributed by Christian groups, in order to have some reading material, Robinson says.

“We realized we needed to have our scriptures available for the Jewish recruits just to fill the void,” he says. “Once we had them, they flew out the door.”

The Tanakh, as well as the JWB Siddur, are both available to active-duty Jewish military personnel for free. Anyone else wishing copies can purchase them for $36 each. For more information, contact [email protected]