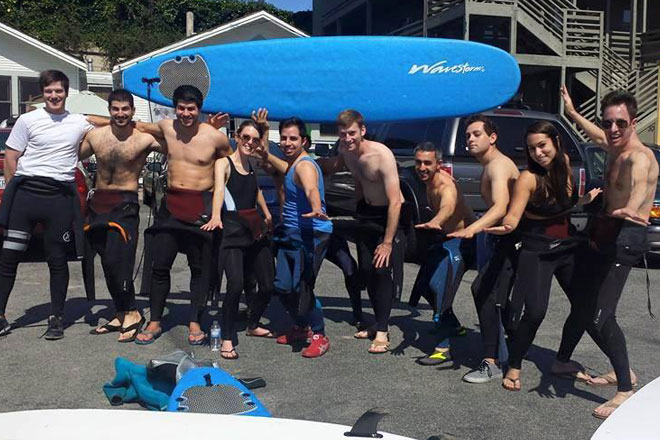 How do you get busy young adults to embrace an active role in the Jewish community?

The answer to the question in California’s Silicon Valley is a new type of young adult outreach program called ENGAJ. A collaboration between the Oshman Family JCC and Hillel at Stanford, ENGAJ sparks Jewish young professionals and graduate students to connect meaningfully with each other within a framework of Judaism.

Since its launch in March 2015, ENGAJ has succeeded in recruiting two cohorts of 20 fellows—young adult leaders—who meet monthly to explore Jewish intentionality, then design events for their peers that reflect their intellectual, professional and personal passions. As a result, the JCC has been able to draw in unengaged young adults in the Peninsula, more than 500 of whom have already joined ENGAJ’s Facebook group.

A key component of being an ENGAJ Fellow is the opportunity to develop strong friendships within the cohort through frequent sessions that facilitate meaningful conversation on a variety of topics. The first cohort’s topics ranged from Jewish identity to tikkun olam, or repairing the world, to leadership skills. These extremely busy young adults found the sessions so inspiring that they often stayed late on weekday nights to continue their conversations.

The fellows are an impressively diverse group of graduate students and young professionals in fields such as law, sociology, international relations, medicine, engineering, athletics and arts education. Their Jewish observance ranges from “atheist” to “modern Orthodox” and their first languages include Russian, Italian, Mandarin, Spanish, Portuguese and Yiddish.

To help spread the word about ENGAJ, each fellow also meets individually with Jewish young adults over coffee to discuss their Judaism and professional/academic/other passions. More than 200 new individuals have taken part in these conversations so far. These “engajments” help fellows customize events to their audience.

The programs are as diverse as the fellows themselves. In “Spiritual Surfing in Santa Cruz” 15 young adults took a two-hour beginner surf lesson before an ENGAJ Fellow spoke from the heart about why surfing is a spiritual Jewish experience for him. Other events have included an Israel election role-play; home-cooked Sephardic/Russian dinners; Israel craft beer tasting/trivia; Jewish board games night; a discussion about the role of prayer; Israeli-themed Zumba; a challah braiding/sangria night; and “Tikkun Olam Sustainable Farming Day.”

In July, fellows participated in a weekend-long ENGAJ retreat with themes of “Reminiscing, Reimagining, and Rededicating.” Fellows led Shabbat blessings featuring ritual items of personal significance, including candles from Tzfat and a grandfather’s siddur, and discussed experiences that changed their conception of what “Jewish” could be. Conversation lasted until three in the morning!

The JCC’s new group of 20 fellows met for the first of 10 monthly sessions in October. ENGAJ has again succeeded in recruiting highly influential young adult Jewish leaders, including two who hail all the way from Panama and Brazil.

This year’s ENGAJ cohort has already led a sustainable sushi workshop and a seudah shlishit, the traditional third meal of Shabbat, with nigunnim, or wordless melodies. First- and second-year cohorts of fellows are eager to continue designing and leading events that reflect their diverse interests, including plans for a massive Hanukkah party this December!