I returned from Israel on Tuesday. David Wax, JCC Association’s newly elected chair of the board, returned home to San Diego the day before. We had spent the preceding week exploring ways to build on and strengthen our movement’s engagement with Israel as we continue pursuit of greater Jewish community and more vibrant Jewish life. The future, ripe with opportunity, was the centerpiece of our intimate dialogues with luminaries such as Dr. Nachman Shai, minister for Diaspora affairs; the Honorable Esther Hayut, chief justice of the Supreme Court; and Isaac Herzog, president of the State of Israel.

Conversations with others focused on the present and how we can capitalize on current dynamics to foster ties and closer personal connections. Celebrated scholars and prolific authors, including Rabbi Daniel Gordis, Professor Gil Troy, and Dr. Einat Wilf, independently reflected on elements of the relationship, sources of possible tension, and the importance of building trust by promoting greater mutual familiarity.

Against the backdrop of a magnificent Tel Aviv sunset, we enjoyed time with another Israeli luminary, and this conversation focused on Israel’s past. Michael Bar-Zohar is the official biographer of the country’s founding father, David Ben-Gurion. As a brash and talented 20-something scholar with a surprise bestseller about Israel’s 1956 Suez campaign to his credit, Bar-Zohar captured Ben-Gurion’s attention in 1964 and began a 13-year odyssey, nine in the company of Ben-Gurion himself across the last years of his life, together with members of his inner circle, the most notable names in the early history of the State. The effort continued for several additional years, following Ben-Gurion’s death in December of 1973, and the result was a three-volume Hebrew edition, followed shortly thereafter by a single volume condensed edition in English in 1977. 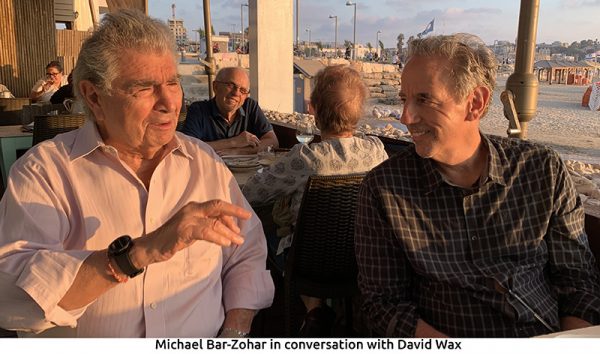 I first met Bar-Zohar more than a decade ago, after finding it difficult to obtain copies of the English edition, which I wanted for a leadership development program connected with Ben-Gurion University. We spoke over lunch in New York, and I quickly realized that I was in the company of a man who had first-hand insights into Israel’s foremost historical figures, borne of intimate personal connections—Golda Meir, Moshe Dayan, Chaim Herzog, Yitzchak Rabin, Menachem Begin, Shimon Peres (for whom he is also the official biographer), and the list goes on. He is a unique link to this extraordinary generation because he somehow managed, while still only in his 20s, to inspire the confidence of Ben-Gurion himself. A prolific author with more than 40 books to his credit, Bar-Zohar is a treasure trove of stories, matched only by his charm and ability as a storyteller. David and I were captivated.

It is hard not to be a bit wistful when it comes to our fleeting connections with the past. My teacher and mentor in Young Judaea, Mel Reisfield z”l, who passed away at 92 in January 2021, always emphasized that “we Jews are endowed with a sense of history.” Our people’s story goes back 4,000 years, and yet our detailed insights are dimmed by the passage of time. The mid-20th century was perhaps the most significant period in Jewish history since the destruction of the Second Temple, and for each of us, the chance to have grown up surrounded by firsthand participants, witnesses, and survivors of those monumental events has been a unique privilege—one that is increasingly fleeting.

It is therefore incumbent upon us to make the most of the opportunities we have now to tap into those remarkable people—and draw as much insight, wisdom, and perspective from them as we can, clear in the knowledge that it will fall to us, soon enough, to be the bearers of those stories and insights for the generations that follow.

My colleague, Jonathan Ornstein, the executive director of Poland’s JCC Krakow, is among an inspired group of Jewish leaders that has spearheaded just such an effort. In 2021 they launched the first Holocaust Survivor Day. Not a day to mourn what was lost but rather a day to celebrate—a salute to those who survived and the lives they’ve lived since.

This Sunday, June 26, 2022, marks the second annual Holocaust Survivor Day. As Jonathan, together with his partner and colleague, Michael Berenbaum, wrote in an op-ed in The Jerusalem Post on March 6, 2021:

Holocaust survivors deserve a day of joy; a day of celebration. Not a day to share with condemnation of the Nazis, but a day to celebrate the lives they built in response to the Holocaust. Survivors represent the best in all of us, the best of the human spirit. They are our treasure and our light, and we must shine that light into every dark corner of our world. We call on the world to join us and celebrate the inaugural Holocaust Survivor Day on June 26th.

I couldn’t agree more and strongly encourage you to recognize and honor the survivors in your community. Here are three simple things you can do this year to celebrate these treasured members of our family:

You are invited to leave messages and to answer the questions below  at Holocaust Survivor Day 2022:

What message do you have for Holocaust survivors?

Is there a Holocaust survivor who has impacted your life? If so, please tell us about them.

What do Holocaust survivors mean to you?

We Jews are endowed with a sense of history. What a privilege to be able to speak with and celebrate those who made history.

May they, and may we all, go from strength to strength.