This past weekend, I shared in a series of experiences that I will carry with me for the rest of my life, a notion shared, no doubt, by all who took part in them. I’ve been wrestling with how best to convey them to you without this message becoming a magnum opus or alternatively diminishing their significance by simply saying too little.

Here’s where I came out.

I have been privileged to experience many powerful and emotional moments over the course of my career, but the dedication of a sefer Torah in names and honor of Sol and Fay Chase, z”l, on Monday morning at Camp David will forever hold a special place in my heart. It was the consummate affirmation of the strength, resilience, and boundless endurance of the Jewish people.

Survivors of the Holocaust, Sol and Fay literally passed through the Gates of Hell, landing on these shores without a penny to their names. They began a new chapter, started a new family, and rooted that family in the values of American freedom and democracy, marrying the best of this country to the richness of Jewish tradition and history. A few short decades later, the seeds they planted have grown into an orchard of achievement: a passionate family dedicated to country, to service, to philanthropy, to Jewish life, and to the State of Israel. And now, their story is a permanent fixture in the interfaith chapel of the President of the United States at Camp David. More than a story, it is a saga that will be shared through words of Torah—to all who may be privileged to hear it read or chanted—now and for all time. This is a story of triumph and patriotism. It’s the story of the Chase family, and of how Irv and Nancy, their siblings, and their children, made this moment possible. And now it’s our story too. 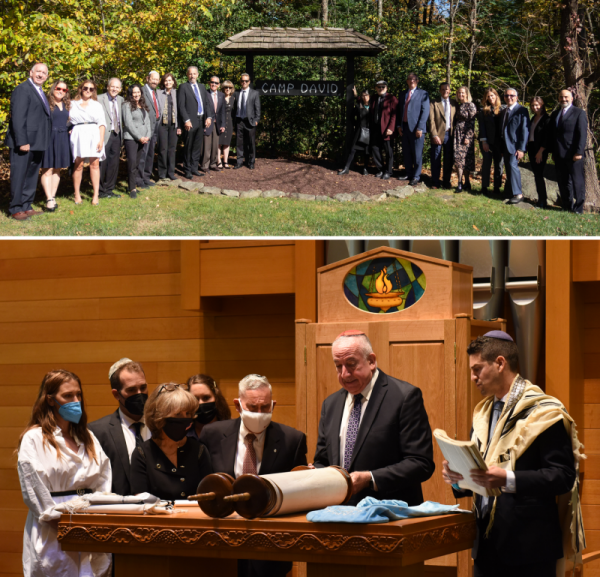 The Torah dedication at Camp David was perhaps the most poignant moment in a weekend that included welcoming Shabbat with the midshipmen at the United States Naval Academy at Annapolis. It included laying wreaths at the Tomb of the Unknown Soldier and the Jewish Chaplains Memorial at Arlington National Cemetery. It included a visit to Mount Vernon, the historic home of President George Washington, whose devotion to religious liberty found powerful expression in his 1790 letter to the leaders of the Hebrew Congregation of Newport, Rhode Island.

Over dinner at the Naval Academy, I had occasion to speak with several newly minted midshipmen about the evolving social dynamics in which our nation is often so divisively engaged. I inquired as to whether or not these issues were getting attention at Annapolis and was greeted with a proud and resounding “yes.” Respect for the individual and for personal identity as reflected in race, ethnicity, religion, and gender orientation appear to serve as critical elements in the development of leaders—leaders who will be tested in service to our country and its people, in wartime and in times of peace. Leaders who will bring their extraordinary training and experience to bear throughout their lives, most of which they will likely spend as civilians.

Respect for difference is not where these issues end. As we delved further into the topic, attracting the interest of others in our delegation, upperclassmen, and our hosts, Chaplain Balaban and Admiral Becker, it became clear that respect for our differences is only part of the story. The other part is about so much more. It’s about what we, as Americans, have in common. It’s about freedom, democracy, and liberty. It’s about the vision and example of George Washington and the wisdom and imagination of the framers of the Constitution. It’s not about me. It’s about “We the People.”

I have continued to reflect on that conversation, trying to put into words a simple summation that effectively characterizes this commitment to community, to country, and to nation, and, again, here’s where I came out: Our extraordinary diversity enriches us as a people, but it is in our commitment to common cause and purpose that we find our greatest strength, our greatest potential.

Irv and Nancy are among the founders of the magnificent Merage Jewish Community Center of Orange County in Irvine, California, a flagship JCC in our movement. It opened its doors in 2004 with Irv as chair of its board from that day until the fall of 2020, working alongside longtime and now retired CEO Dan Bernstein. Together they created an institution with an ethos of service and a powerful and durable engagement with Israel, as well as one that has proudly hosted the JCC Maccabi Games® three times (2007, 2013, 2018). It is a JCC that continues to grow and evolve, now under new leadership, to reflect the changing nature of Jewish life in Orange County. And through it all, our movement’s work with and in support of Jews in uniform, by way of JWB Jewish Chaplains Council®, has maintained an honored place in the soul of the JCC.

JCC Association was born as the Jewish Welfare Board (JWB) in 1917, within days of the United States’ entry into World War I. Its mandate was to support the spiritual needs of Jewish men going off to war. Over the ensuing 104 years, JWB evolved to embrace a growing commitment to Jewish community and the support of JCCs across this continent, which today number 170. But we never stopped serving the Jews who serve in the United States armed forces, today numbering more than 40,000 active-duty members of the U.S. military who are Jewish or whose partners, children, or dependents are Jewish and live with them on military installations here and around the world, along with the country’s more than 37,000 Jewish military veterans. Rabbi Irv Elson, vice president and director, JWB Jewish Chaplains Council ® and a career Navy Chaplain whose own service included several tours under fire, guides a remarkable team of professional and lay leaders whose sole purpose is to serve those who serve today. More broadly, JWB ensures that after their service to their country is complete, these military families find a proud place in JCC communities.

That’s what last weekend was all about. May the Chase family, to whom we are indebted for their extraordinary leadership, continue to go from strength to strength. And may God bless the United States of America.

P.S. This week marks the third anniversary of the Tree of Life Synagogue massacre in Pittsburgh that tragically took the lives of  11 innocent souls as they worshipped on Shabbat. In much the same way this week’s moving visit to Camp David will stay with those who were there, the events of October 27, 2018, are indelibly seared in the memories of many. In this weekly update, Brian Schreiber, executive director of the JCC of Greater Pittsburgh, poignantly reflects on the anniversary and the healing that continues