But You Didn’t Go Alone

JCC Association CEO and President Doron Krakow is pleased to share with you the letter he has written to the 106 JCC CEOs and executive directors who came together in Houston, Texas, last week for JCCs of North America Mifgash 2022: Executive Leadership Retreat. Hebrew for meeting or encounter, “Mifgash,” as it is known colloquially, is an annual forum in which the JCC Movement’s senior executives gather to learn together as a cohort and from each other. This year’s three-day retreat was the first such meeting for the group since the pandemic began, making it an especially opportune moment to champion and celebrate them for their exemplary leadership and creativity throughout the last 26 months. Having now returned home to continue to lead in their—and your—home communities, they and their work are most deserving of ongoing gratitude and support. 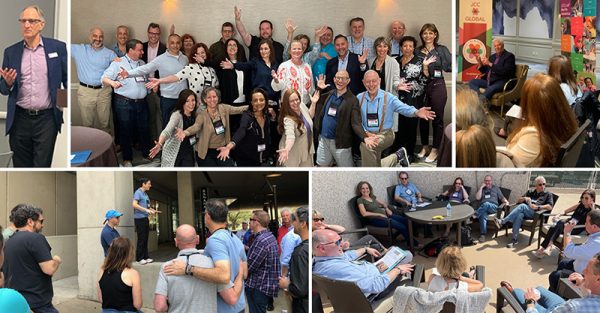 We bade one another farewell on Wednesday, following what was truly a memorable gathering. It didn’t end for all of us when you left. Jen, Gary, and I continued on to the Evelyn Rubenstein JCC where we met with the agency’s board and many of its most generous and dedicated donors—three and four generations strong, anchors of one of our movement’s extraordinary institutions. The last time we were there, the facility had only recently recovered from having been submerged under more than 10 feet of water in Hurricane Harvey’s immediate aftermath, and its future was very much in doubt.

But the community rallied in the face of that crisis, and in the ensuing years undertook a $50 million capital campaign to restore and enhance existing facilities and pursue a major expansion to create what will surely be among the flagship JCCs in our movement when the ribbon is cut next February. Our meeting with the board took place in a room that literally had been under water and was once again overflowing—this time with passionate and dedicated lay leaders and staff with whom we talked about the future.

That visit was a fitting endcap to the days we spent together—days that weren’t about any one JCC but rather were entirely about the remarkable professionals who lead them. Those days were about you. It had been 26 months since we’d last gathered. In that time, we endured a worldwide pandemic, the likes of which hadn’t been seen in over a century. Seemingly overnight, our thriving institutions were forced to confront their very viability as, one by one, you made the nearly unthinkable decision to lock the doors and send everyone home. Revenue dried up and nearly one in three JCC professionals across our movement lost their jobs—colleagues, neighbors, and friends with whom we had labored together to build community. Depriving colleagues of their livelihood is about the hardest thing we do as CEOs—and you had to do it nearly 12,000 times.

Shuttered programs, suspended memberships, and exhausted reserves quickly followed, even as you confronted the same fears and anxieties about the pandemic’s implications for your own families. How many times have we heard: It’s lonely at the top? It often feels that way, but I don’t think we’ve ever before felt quite so alone.

Our communities were in crisis, and you had to respond. Looking back, it’s almost unimaginable the many ways you rallied. You huddled with experts to figure out how. You invested when you had almost nothing to invest; you retrofitted your facilities and made them safe to provide childcare for desperate families. You joined hands with social service agencies, turning hot meal programs into vast meal production and delivery efforts that provided more than a million meals to seniors in need and others in prolonged isolation. You established satellite day camps to bring programs closer to families. You co-located special needs activities, invited shuttered congregations to hold High Holiday services at your JCCs. You found new partners to ensure that the greater needs of the community—as opposed to narrower institutional needs—would be paramount.

Government relief helped a lot as did the extraordinary generosity of tens of thousands of donors—many of them new. You brought us back from the brink, but recovery wasn’t a straight line. New variants. New regulations. Racial and social protests. Rising antisemitism. Then, suddenly, too few staff and too few candidates to fill increasing vacancies. Community expectations remained and grew as you labored on—day and night, week after week. Keep those doors open. Build back that business. Care for your staff. Lead.

You looked to colleagues and peers for support, but almost no one could understand—except maybe a fellow JCC executive.

I think that’s what made these few days together so remarkable and why there was an audible sigh of relief in those very first moments. We knew—and no one needed to say a word. For three days we swapped stories and shared experiences, floated ideas, and explored opportunities. We looked to one another for wisdom and understanding. We welcomed our newest colleagues, the 21 first-time execs whose tenures began during the pandemic. We celebrated the careers of retiring giants: Leslie Fischman (New Orleans) and Mark Sokoll (Boston). We mourned the sudden loss of our longtime and newly retired colleague, Rick Nelson z”l. We reflected on the war in Ukraine and how we might lend a hand to those in need. A new wave of bomb threats. Another terrorist attack in Bnei Brak. We talked about it all.

All the while, I sat and marveled. I’ve known you as colleagues and allies. More and more I’ve come to know you as friends. But this week I realized I know you as something else: heroes. My heroes.

The days were full, but they passed quickly, and suddenly it was time to say goodbye. Newly energized and with the weight on your shoulders lessened somewhat, you made ready to return home, knowing you had indeed risen to the occasion. Perhaps these long months had given us a glimpse of how important JCCs will be in the work that lies ahead. The renewed pursuit of greater Jewish community and more vibrant Jewish life—hand-in-hand with newfound partners and longstanding allies.

More warm embraces that may have lingered for an extra beat—the culmination of time spent with others who get it—who understand what it’s been like. But I’m not sure I didn’t also see a few furrowed brows and backward glances as you wheeled your luggage down to the lobby. None of us is quite sure what lies ahead, and soon enough, you’ll be picking up the mantle of leadership once more.

But here’s what I meant to tell you before you left: You may have gone back, but you didn’t go alone. We went with you. All of us. And we’re going to stay with you—at your side—from here on out. Perhaps that’s what this gathering was really all about. Mark Sokoll may have said it best when he told us that each one of us is different and we’re all exactly the same.

You are leaders of the North American Jewish community and stewards of an extraordinary moment in the 4,000-year history of our people. Most of all, you are architects of the chapter to come—the one that is yet to be written.

Be strong. Be strong. And we will be strengthened. Together.