“Self-trust is the essence of heroism. It is the state of the soul at war, and its ultimate objects are the last defiance of falsehood and wrong, and the power to bear all that can be inflicted by evil agents. It speaks the truth, and it is just, generous, hospitable, temperate, scornful of petty calculations, and scornful of being scorned. It persists; it is of an undaunted boldness, and of a fortitude not to be wearied out.”
— Ralph Waldo Emerson 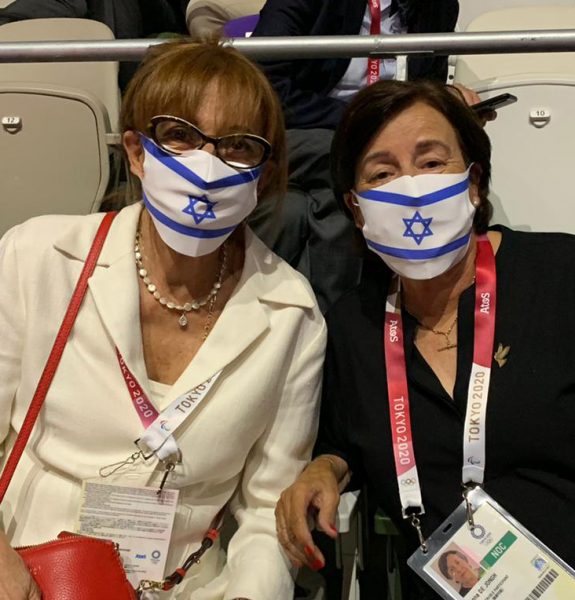 At 6:51 this morning, our friend, David (Kirschtel, CEO of JCC Rockland) forwarded me this photo of you, taken inside the stadium ahead of the Opening Ceremonies of the 2021 Tokyo Olympic Games, which were broadcast here beginning at 7 a.m. EDT. We waited and we wondered. Would it finally happen? After 49 years of deafening silence, would the International Olympic Committee (IOC) finally acknowledge the memories of the Munich 11, murdered by Palestinian terrorists in the Olympic Village in the midst of the 1972 Summer Olympic Games, on its biggest stage? There had been no advance notification, but you were there—as you have been at every Games since the murders of your husbands, Andre, z”l, and Yossef, z”l, and the nine other members of that Israeli delegation.

We waited and we watched—together with countless others in Israel and around the world. Among them, hundreds of thousands of athletes, coaches, family, and community members who have taken part in memorials for the Munich 11 at the Opening Ceremonies of the JCC Maccabi Games® each year since the advent of those Games nearly 40 years ago.

And then, at 7:37 a.m. EDT time, immediately following a moment of silence in tribute to those lost during the pandemic and throughout Olympic history, the public address announcer said “In particular we remember those who lost their lives during the Olympic Games. One group still holds a strong place in all our memories and stands for all of those we have lost at the Games: the members of the Israel delegation at the Olympic Games Munich 1972.” It had taken 49 years, but there it was. In the first moments of the Opening Ceremonies, which will be seen by hundreds of millions of people across the globe as the Games of the XXXII Olympiad get underway.

Many voices throughout the years have called upon the IOC to remember the Munich 11. Diplomats and political leaders. Broadcasters and movie stars. Athletes and coaches. Israelis and Jews from around the world. JCC Rockland spearheaded a huge, grassroots effort ahead of the 2012 Olympics in London, which took place on the 40th anniversary of the massacre, creating a media storm of protest even as those Games began without so much as a nod to Munich. But of all of the voices, two have stood out. Yours.

Year after year, Olympics after Olympics. You refused to be ignored. Your passion, your commitment, your inexhaustible energy and determination have been unwavering. You made us believe. Now, at long last, you made a believer of Thomas Bach, president of the International Olympic Committee. And so today, the 2021 Tokyo Olympics honors the memories of:

We remember them. And thanks to you, so too does the entire world. You’re my heroes.

For our many friends and colleagues who couldn’t watch the Opening Ceremonies live, they will be rebroadcast this evening at 7:30 p.m. EDT, so they can share in the moment of silence, which happens early in the ceremony. For those who want to know more of the backstory, watch the documentary “There Was No Silence,” which will stream this week on Virtual J and features a conversation with Ankie Spitzer; Joe Allen, the documentary filmmaker; and David Kirschtel, the CEO of the Rockland J.